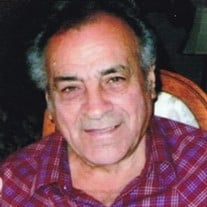 Antonino “Tony” Russo, 80, of Berlin, CT and formerly of Cross Roads, TX, beloved husband of the late Janis (Patton) Russo, passed away peacefully on Thursday, January 17, 2019. Born in Hartford, CT on November 4, 1938, he was the son of the late Antonino and Salvatrice “Tina” (Pappalardo) Russo. Tony grew up in Connecticut and graduated Bulkeley High School Class of ’56 then joined the U.S. Air Force and was always a proud veteran. After serving his country, he worked many years as a sales representative for Arrow Electronics and moved to Texas with his wife. Together they found their dream home with plenty of land and a stable that allowed Tony to pursue his love of horses. Tony was passionate in his love of baseball, especially the New York Yankees and Texas Rangers. After his wife passed away 12 years ago, he moved back to Connecticut to be closer to his sister. He will be dearly missed by his family and friends. Tony is survived by his sister, Angela Gionfriddo and husband Joseph of Rocky Hill, CT; nephews, Michael Gionfriddo and David Gionfriddo and wife Krystyna; brother-in-law, George Patton and wife Gloria; sister-in-law, Patricia Patton; nieces, Carla Dean and Mary White and husband Eric. He was predeceased by his nephew, Roy Wellman, as well as several other extended family members and friends. Visitation will be held 9:00AM-10:00AM, Saturday, January 26, 2019 at Slay Memorial Chapel in Aubrey, TX and the funeral service will begin at 10:00AM with Rev. John Theisen officiating.  In lieu of flowers, donations in Tony’s memory may be made to the Wounded Warrior Project, P.O. Box 758517, Topeka, KS 66675. Online condolences may be shared at www.slaymemorialfuneralhome.com. Services are under the direction of Terri Slay and Slay Memorial Funeral Center.

The family of Antonino "Tony" Russo created this Life Tributes page to make it easy to share your memories.