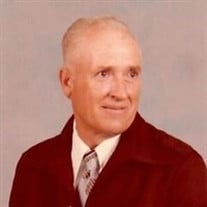 Billie Joe Hampton, 90, of Pilot Point, passed away Thursday, October 12, 2017, at his home in Pilot Point, TX.  Bill was born August 19, 1927 in Denton County to Willie Wright (Big Bill) Hampton and Dovie (Redfearn) Hampton.  He married Bobbie Louise Close on January 18, 1947 in Denton County. Bill joined the US Navy at the age of 17 and served in the United States Navy during WW II.  He was a farmer and rancher in Denton County. Bill and Bobbie owned and operated a grocery store and the only ice house in Aubrey for a number of years. Bill's grandfather, William Redfearn was one of the first  two men to bring peanuts to this area from Missouri when he came to Texas and as many Redfearn decendents, Bill carried on the tradition. He also served several terms on the Aubrey Independent School Board as treasurer and Vice-President and in 1967 was instrumental in building the first new high school in almost 40 years that brought Aubrey's juniors and seniors back to Aubrey to graduate. He was an avid fisherman and loved dominos but most of all he loved his family, his church, and his Lord.  Bill was ordained as a deacon on January 6, 2006 at First Baptist Church Krugerville and served for approximately twelve years.Bill is survived by his wife of seventy years, Bobbie; two daughters, Judy Cranmore of Pilot Point, TX and husband, Eddie, Sharlotte Owens of Pilot Point, TX and husband Joe; four grandchildren, Lily and Christopher Owens, Jeff and Joseph Cranmore; five great-grandchildren, Garret, Evan, and Rhys Owens, Daniel and Edward Cranmore; brother, Kenneth Hampton; sister, Geneva Smith of Krugerville, TX; and special extended family, Clint, Debbie and Savannah Dawes, and Linden and Linda Webb.  Bill was preceded in death by his parents, Willie and Dovie Hampton; brother, Dee Hampton; and sister Joyce Bedrick. A visitation will be held at 1:30PM on Monday, October 16, 2017 at First Baptist Church Krugerville in Krugerville, TX. A funeral service will be immediately following at 2:30 PM with Sam Redfearn officiating.   Burial will be at Belew Cemetery in Aubrey, TX.  Pallbearers are Chris Owens, Jeff Cranmore, Joseph Cranmore, Gene Hampton, Lindon Webb and Paul Redfearn.  The deacons of First Baptist Church Krugerville will serve as honorary pallbearers.  Online condolences may be shared at www.slaymemorialfuneralhome.com.In lieu of flowers please make donations in Bill's memory to First Baptist Church of Krugerville, 5021 US Hwy 377, Krugerville, TX. Services are under the direction of Terri Slay and Slay Memorial Funeral Center. To send a flower arrangement to the family of Billie "Bill" Joe Hampton, please click here to visit our Sympathy Store.

The family of Billie "Bill" Joe Hampton created this Life Tributes page to make it easy to share your memories.