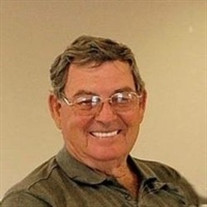 Billy Joe "Bill" Wilson, 84, of Aubrey, TX passed away Friday, September 11, 2015 at home surrounded by his family. He was born December 10, 1930 in Aubrey, TX to Garland and Irene (Washburn) Wilson. Bill married Betty Jones August 14, 1993. Bill spent his life serving his Lord, his country and his community. This life of service was witnessed by his family and his community. Bill entered the Army at the age of eighteen and earned the rank of Sergeant. He fought in the Korean War. Returning from the service, Bill drove trucks with his brothers and then began his own construction company in 1953, successfully operating the business until 2004. Bill was one of the founders of the Aubrey Church of Christ in 1965. He served as a minister when needed and as a faithful member until his death. He was also one of the original founders of the Blackrock Water Supply of Aubrey in 1968, serving on the board of directors for forty-two years. Bill was also a founding member of the Aubrey Area Ambulance in 1980. He served seven years as an EMT and at the age of fifty-seven he earned his paramedic certification, serving another fifteen years. He was a member of the Masons, achieving the level of Thirty-Second Degree Mason. Bill joined his wife Betty in creating one of the larger and more popular restaurants in the Aubrey area. The restaurant continues operating as Betty's Café serving "home cooked" meals to the community. Bill is survived his wife, Betty of Aubrey, TX; three sons, Weldon Wilson and wife Terri of Denton, TX, Garland Wilson and wife Terri of Aubrey, TX and Michael Starr and wife Melanie of Aubrey, TX; four daughters, Ann Norris of Celina, TX, Debra Kay Wilson and Tammy Gray of Aubrey, TX and Belinda and husband Michael Lauer of Aubrey, TX; twenty-one grandchildren, thirty great-grandchildren and four great-great-grandchildren; two brothers, E.W. "Son" Wilson and Kenneth Wilson of Aubrey, TX; one sister, Joyce Ann Harmon of Aubrey, TX. He was preceded in death by his parents, two sons; Billy Joe Wilson, Jr. and Ricky Joe Wilson; one daughter, Sherilyn Elaine Wilson; two brothers, John Henery Wilson and Buddy Wilson; one sister, Mary Estell Rodden. Visitation will be held Sunday, 6:00PM-8:00PM, September 13, 2015 at Slay Memorial Chapel in Aubrey. A funeral service will be held at 10:00AM, Monday, September 14, 2015 at Midway Baptist Church in Aubrey with Jeff Parrent officiating. Interment will follow at Wilson Cemetery, Aubrey,TX. Online condolences may be shared at www.slaymemorialfuneralhome.com. Memorial Donations may be made to Aubrey Area Ambulance, 200 W. Sycamore, Aubrey, TX 76227 Services are under the direction of Terri Slay and Slay Memorial Funeral Center. To send a flower arrangement to the family of Billy Joe Wilson, please click here to visit our Sympathy Store.

The family of Billy Joe Wilson created this Life Tributes page to make it easy to share your memories.