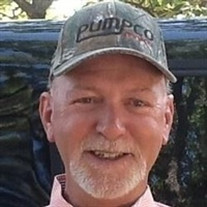 Ernest “Brad” Kelly passed away last Saturday, January 14, 2017. Brad was diagnosed with Tonsil Cancer April 10, 2014.  He had two more good years of wonderful memories with his family and friends.  Brad was born September 16, 1952 in Pilot Point, TX to Ernest Edward Kelly and Ann Davis. He was raised in Hurst, TX and was class of ‘71 at L.D. Bell High School. He had many wonderful childhood memories and often said he would not have wanted to grow up in any other era. He loved pumping gas at his Uncle Joe’s gas station as a young wee man child in downtown Pilot Point.  He always looked forward to staying with his grandparents in Tioga, TX with his two younger brothers, David and Lynn. If not there, then running wild in Watauga at his Aunt Juanita’s with his four cousins.As a young adult he married his beautiful first wife and mother of his children, Pam Nowell in 1972. When Kristal was born in 1974 the doctor came out and said it’s a girl and Brad said that’s just what I wanted.  Then he wanted a boy, so Byran came in 1976. Just what he wanted, a son and daughter.  Family completed.  In 1999, he met Starla and married her on October 15, 2009 in Santa Fe, NM. He took on the task of loving her with three preteens. End result, his step-daughter had the latest grandbaby and gave his last name, Kelly, for his last name. Brad has eleven grandkids by the five children, the nine boys and two girls lovingly call him Grumps. The day he became a grandfather was September 15, 1999, the day before his birthday. That day he said he could not have asked for a better day to become a grandfather.  He was so excited to hold that baby girl.Brad has always been able to make and keep lifelong friends from many of his jobs across decades and state lines. His life in construction began in 1970 with BR Nowell.  Many of those friends are still around from the 70’s. And this continued on until his last job this past summer.  He was always good to everyone on the job by remembering their name and inquiring about the well-being of their families. Brad was always surprised how it could be years since he spoke to someone from an old job and people always remember his name as soon as they heard his voice.  Who could forget Brad?  That man wasn’t going to let you.Brad had a love for music, motorcycles, and traveling.  And a gift for telling a story, remembering quotes, and never forgetting a name.  Thomas Paine wrote “I do not choose to be a common man.  It is my right to be uncommon … if I can.”  He lived by that every day.  He brought so many smiles and laughter to the people he touched throughout his life. He will be missed.He is survived by his father, Ernest of Collinsville, TX; wife, Starla of Collinsville, TX; daughter, Kristal Fanning of Haslet, TX, son, Byran Kelly of Argyle, TX; two step-sons, Joshua Jenkins of Granbury, TX and Joseph Jenkins of North Richland Hills, TX; step-daughter, Jana Jenkins of Austin, TX; two granddaughters and nine grandsons; two brothers, Lynn Kelly of Bangkok, Thailand and David Kelly of Austin, TX.  Brad was preceded in death by his mother, Ann.Visitation will be held 1:00PM-2:00PM, Saturday, January 21, 2017 at Slay Memorial Chapel in Aubrey, TX.  The memorial service will begin at 2:00PM with Steve Frerich officiating.  Online condolences may be shared at www.slaymemorialfuneralhome.com. Donations in Brad’s honor can be made at www.youcaring.com/bradkelly-709797.Services are under the direction of Terri Slay and Slay Memorial Funeral Center. To send a flower arrangement to the family of Brad E. Kelly, please click here to visit our Sympathy Store.

The family of Brad E. Kelly created this Life Tributes page to make it easy to share your memories.