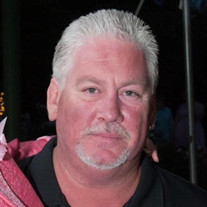 Bradley Scott Garnett, 60, of Krugerville, TX, passed away Friday, January 15, 2021. Brad was born July 21, 1960 in Dallas, TX to Paul and Bonita (Stanley) Garnett. He married Kim Bradsby on September 1, 2000 in The Colony, TX. Growing up, Brad was an outstanding athlete. He played football, baseball, and track for DeSoto High School. In 1978 he was the first round draft pick for the Pittsburgh Pirates. While playing in the minor leagues, his greatest claim to fame was, according to everyone who witnessed it, hitting the longest homerun they had ever seen. Brad drove a mixer truck for Frank Bartel Transportation for over 20 years. He was a natural born storyteller and we’ll miss hearing about all his escapades. Suffice to say, he had a way with words. Brad is survived by his wife, Kim of Krugerville, TX; son, Justin Graham and wife Suzanne of New Braunfels, TX; daughter, Clare Graham-Riecke and husband Melvin of Sanger, TX; and three grandchildren, Jackson Graham of New Braunfels, TX, Tanner Riecke and Autumn Riecke both of Sanger, TX. He was preceded in death by his parents, Paul and Bonita. Visitation will be held 1:00PM-2:00PM, Wednesday, January 20, 2021 at Slay Memorial Chapel in Aubrey, TX. The graveside service will follow beginning at 2:30PM at Belew Cemetery in Aubrey, TX. Online condolences may be shared at www.slaymemorialfuneralhome.com. Arrangements are under the direction of Terri Slay and Slay Memorial Funeral Center.

The family of Bradley Scott Garnett created this Life Tributes page to make it easy to share your memories.