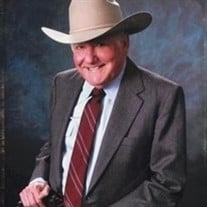 Carl Jack Smith, Jr. of Collinsville, Texas, passed away Friday, November 21, 2014 in Denton, Texas. Carl was born January 4, 1932 to Carl Jack Smith Sr. and Gladys Scott Smith in Lakeview near Memphis, Texas. He graduated from Texas Tech as a Civil Engineer. He married Brenda Bridgewater July 17, 1994 in Whitesboro, Texas. Carl was the sole owner of Regional Utilities and a long-standing member of the board of directors at the Southwest Bank in Irving, Texas. Upon retirement, he established a thousand acre, operational cattle ranch and multiple residential subdivisions at Lake Ray Roberts near Tioga. In his lifetime, he doubled the size of his family's ranch in Lakeview to 2,000 acres, further increasing the legacy that will be passed on to future generations. Carl's visitation will be held on Monday, November 24, 2014, beginning at 1:30 pm at the Slay Memorial Chapel in Aubrey, Texas. A funeral service will follow at 2:30pm with burial at Tioga Cemetery. The Rev. Luther Slay will officiate. Carl is survived by his wife, Brenda of Collinsville, Texas; two sons, Carl J. Smith III and John Derek McDaniel both of Texas; six daughters, Sarah Clark of Colorado, Janet Ross of Ohio, Melissa Nixon of Delaware, Kimberly Ohlson of Texas, Carla Fuller of Texas, and Kimberly McDaniel of Texas; nineteen grandchildren; three great-grandchildren; and sister of Jan Ferris of Memphis, Texas. Carl is preceded in death by his parents and one son, Marty McDaniel. Services are under the direction of Terri Slay and Slay Memorial Funeral Center, Aubrey To send a flower arrangement to the family of Carl Jack Smith, Jr., please click here to visit our Sympathy Store.

The family of Carl Jack Smith, Jr. created this Life Tributes page to make it easy to share your memories.