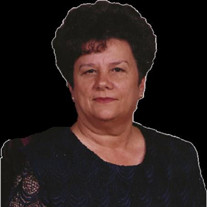 Carolyn Sue Wilson, 75, of Aubrey, TX, passed away Thursday, September 24, 2020 in Denton, TX. Carolyn was born February 13, 1945 in Herington, Kansas to Edward Franklin Cranmore and May Marie Sons. Carolyn married Kenneth Wayne Wilson on April 28, 1963 in Aubrey, TX. Carolyn was a loving mother and grandmother to her family. She was also just as loving to her community as well. Carolyn was known for forming and being a member of many committees in Aubrey. She cared very much about the history, the citizens, and the children of the Aubrey area very much. She helped to organize the very first Aubrey Peanut Festival. The Peanut Festival has continued to bring the citizens together to celebrate in Aubrey’s long tradition of raising peanuts, and the various talents and historical presence of Aubrey’s unique citizens. Carolyn was also an original member of the Aubrey Library Board. She helped to form a library to enrich our lives and give the children a place of learning and creativity. She was a member of the Women’s Fire Auxiliary where she supported local firemen and first responders. Carolyn was one of the original founding members to develop the city park here in Aubrey, which has been a frequent host of many festivities and community gatherings. She also helped to form the Aubrey Area Museum which continues to serve the community by providing an extensive historical knowledge of the founding families and history of our wonderful city. Carolyn was a very civic minded person who left many gifts, and tradition for Aubrey citizens. Beyond all the wonderful contributions to the community that Carolyn worked so hard to form, she was also devoted to her family. A loving wife to her husband Kenneth for 57 years, she was also a mother, grandmother, sister, aunt, cousin, niece, and friend who will be missed very much. She left not only a legacy for Aubrey to enjoy but lasting memories for her family as well. Carolyn is survived by her husband Kenneth; sons, Kenny Wilson, Harold Wilson and wife Martha, and Michael Wilson of Aubrey, TX; four grandchildren, Dustin, Patrick, Matthew, and Marissa Wilson of Aubrey, TX; brothers, Charlie Cranmore of OK, and Eddie Cranmore and wife Judy of Pilot Point, TX; and sister, Nancy King and husband Gene of Throckmorton, TX; and many nieces and nephews. Carolyn was preceded in death by her parents, Edward and Marie. Visitation will be held 1:30PM-2:30PM, Sunday, September 27, 2020 at Slay Memorial Chapel in Aubrey, TX. A funeral service will follow at 2:30PM, with Pastor Joseph Baker, Garland Wilson, and Pastor Gene King officiating. Internment will be at Wilson Cemetery in Aubrey, TX. Online condolences may be shared at www.slaymemorialfuneralhome.com. Arrangements are under the direction of Terri Slay and Slay Memorial Funeral Center.

The family of Carolyn Sue Wilson created this Life Tributes page to make it easy to share your memories.