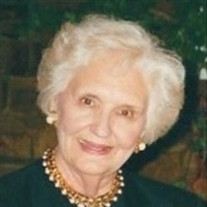 Charlene "Char" Brown, 84, of Tioga, passed away Sunday, August 17, 2014 in Tioga, TX. She was born April 4, 1930 in Callisburg, TX to Otis and Nell (Gordon) Renfro. She was raised in Tioga with one sister, Jen, graduated from Tioga High School in 1947, and studied briefly at The University of North Texas. Eager to join the workforce, she moved to Dallas to work, and eventually did some modeling, for Tiche-Goettinger Department Store at 1900 Elm Street, Downtown Dallas. While at home for a visit, she was introduced to a young Aggie, Herman Brown of Whitesboro. Drawn to his wild side, promise for adventure and rugged good looks, it was clearly love at first sight for everyone except her mother, whose protests failed to deter her from marrying the love of her life on August 20, 1952. A whirlwind honeymoon in Galveston and a move to Bryan to complete the one semester left until his graduation from A&M, she described them as "poor as Jobe's turkey" but happier than imaginable. Upon graduation, Herman began his career in the Army, serving in Korea where he first met a little girl he named, Suzie. After an adoption process, Herman and Suzie came home where she met Char for the first time. With two more children adopted, daughter, Lori, and son, Jeff, a Master's degree and PhD earned, they decided Herman should return to Texas A&M where he served as professor and later as Department Head of Agriculture Education and she served as temporary Mother to lowly and homesick Aggies and ambassador of Aggie Spirit. They would raise their family and continue to live in College Station until Herman's retirement in 1991. Returning to their roots, they moved to Tioga, Char's home town, the same year. In an unexpected turn of events, Herman passed away in 1993, leaving Char to search deep within herself to find what she was capable of accomplishing on your own after his death and find it, she did. Vested in the success and growth of Tioga, she began accepting invitations to serve on steering committees and in various roles promoting economic development, including the Tioga Chamber of Commerce, the Gene Autry Museum and any other opportunity to educate the public on the level of potential found in Tioga. She was a lifelong Methodist with longest memberships including Tioga United Methodist Church in Tioga and A&M United Methodist Church in College Station. Charlene is survived by her son, Jeff Brown of Tioga, TX; two daughters, Suzie and husband Rick Lee of Corpus Christi, TX, Lori and husband Bob Hammers of Sunnyvale, TX; seven grandchildren; and one great-grandchild. She was preceded in death by her parents; husband, Herman; and sister, Virginia Grundei. Visitation will be held 7:00PM - 8:00PM, Wednesday, August 20, 2014 at Slay Memorial Chapel in Aubrey, TX. A funeral service will be held at 10:00AM, Thursday, August 21, 2014 at First United Methodist Church in Tioga, TX with Rev. Carroll Caddell, Mead McGee, and Rev. Dee Morton officiating. Burial will follow at Tioga Cemetery in Tioga. On-line condolences may be shared at www.slaymemorialfuneralhome.com. Memorials may be made to Tioga United Methodist Church Building Fund. The family would like to thank everyone for the many acts of love and kindness. "To give pleasure to a single heart by a single act is better than a thousand heads bowing in prayer." -Gandhi Arrangements are under the direction of Terri Slay and Slay Memorial Funeral Center, Pilot Point. To send a flower arrangement to the family of Charlene Brown, please click here to visit our Sympathy Store.

Charlene "Char" Brown, 84, of Tioga, passed away Sunday, August 17, 2014 in Tioga, TX. She was born April 4, 1930 in Callisburg, TX to Otis and Nell (Gordon) Renfro. She was raised in Tioga with one sister, Jen, graduated from Tioga High School... View Obituary & Service Information

The family of Charlene Brown created this Life Tributes page to make it easy to share your memories.