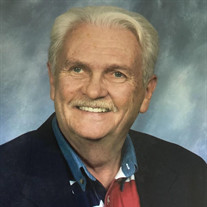 Charles ‘Chuck’ Clayton Seeber, age 90, passed away peacefully in his home in Aubrey, TX with loved ones by his side, on June 29, 2021. Chuck was born June 5, 1931 in Hastings, NY to Avery and Elinor (David) Seeber. Following his graduation from Central Square High School, Chuck enlisted in the U.S. Navy in 1950 at the start of the Korean War and served as an Aviation Electronic Technician. He served four days shy of four years in the Navy, two of which were overseas. He was honorably discharged in 1953. For his service, Chuck was awarded the Korean War Service medal, the United Nations Service medal, the National Defense Service medal, and the Good Conduct medal. Chuck graduated from San Diego State University and went on to have a distinguished career in the electronic industry, earning numerous recognitions and awards, eventually retiring from Bellcore in New Jersey. In his retirement Chuck enjoyed his summers on Sandy Pond, volunteering with Meals on Wheels, traveling the United States, and spending time with his family. Chuck was an accomplished private pilot, logging more than 1300 flying hours, taking off and landing at General Aviation airports across the United States. He continued his service to the country as a Safety Officer at the rank of Major for the U.S. Air Force Auxiliary Civil Air Patrol. His decades of work with CAP spread across the country including locations in New Jersey, New York, Colorado, and Texas. Chuck was a loving and devoted husband to Constance Elinor LaRock who passed away in 2004, two months before they would have celebrated their 50th wedding anniversary. Together they raised their children in many locations: New York, Southern California, North Carolina, and New Jersey, before retiring to Littleton, Colorado then Billings, Montana. They were also very active members of the United Methodist Church in each location. Chuck, a loving and supportive father, is survived by his four children, seven grandchildren and three great-grandchildren: Dr. Cheryl Cook, (Chris), granddaughter Taylor, great-grandchildren Keegan and Charlie. Colonel Craig Myrle Seeber USAF, (Connie), grandchildren Katie Marie and Scott Charles (Melanie) and great-granddaughter Haley Marie. Charles Corey Seeber, (Lisa), grandchildren Captain Charles Zachary USAF and Savannah Marie. Cerena Elinor Seeber, grandchildren Madison Elinor and Odin Avery Thomsen. Additionally, Chuck is survived by his brother, Phillip Seeber of Port Byron, NY, and companion of 15 years, Linda Long of Aubrey, TX. A Celebration of Life will be held in Pulaski, NY on Sunday, July 18, 2021, 12:00pm-2:00pm, at the 3M Sandbar Restaurant (https://www.sandypondsandbar.com). In lieu of flowers, donations in Chuck’s memory may be made to the Civil Air Patrol (https://www.gocivilairpatrol.com/giving) or the American Cancer Society (https://www.cancer.org/involved/donate.html). Online condolences may be shared at www.slaymemorialfuneralhome.com. Arrangements are under the direction of Terri Slay and Slay Memorial Funeral Centers.

The family of Charles 'Chuck' Clayton Seeber created this Life Tributes page to make it easy to share your memories.