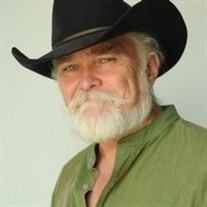 Whistler was born on November 5, 1951, in Kaufman, Texas to Charles Gilbert Higgins and Minnie Genelle (Elder) Parker. Whistler passed peacefully from this life on September 30, 2017, at the age of 65 years old, in Sanger, Texas.Whistler was a cherished father, son, brother, grandpa, and loyal friend to many. Whistler retired from GTE telephone company and decided to pursue his dream of using his God given gift, to create beautiful jewelry, knives, spurs, belts, even guns, as well as many other items. Items that are sure to become heirlooms for the lucky few that are blessed to possess them. Whistler also enjoyed performing for others with his numerous other talents.  Whistling and acting were two of those such passions.Whistler was the life of the party wherever he went, you could find him surrounded by the little ones as he played the guitar and sang old songs that he recalled from when he was a young boy. Whistler could also be found in a group of people telling stories from years past, producing great laughter among the group. He was a delight to the people who knew him, both young and old.Whistler is survived by his daughter, Jaime Croix and husband Scott; granddaughter, Kalleigh Croix; mother, Minnie “Genelle” Parker and husband W.D. Parker; brother, Sam Higgins and wife Sondra; as well as many nieces, nephews, cousins, aunts and uncles.Whistler was preceded in death by his father, Charles Gilbert Higgins; brother, Dennis Glen Higgins; and sister, Cynthia Ann Higgins.Memorial services are to be held 3:00PM on October 5, 2017 by Pastor Ken Peterson at North Texas Trinity Cowboy Church, 9901 FM 2164, Sanger, Texas 76266.Services are under the direction of Terri Slay and Slay Memorial Funeral Center. To send a flower arrangement to the family of Charles Wayne "Whistler" Higgins, please click here to visit our Sympathy Store.

Whistler was born on November 5, 1951, in Kaufman, Texas to Charles Gilbert Higgins and Minnie Genelle (Elder) Parker. Whistler passed peacefully from this life on September 30, 2017, at the age of 65 years old, in Sanger, Texas.Whistler was... View Obituary & Service Information

The family of Charles Wayne "Whistler" Higgins created this Life Tributes page to make it easy to share your memories.