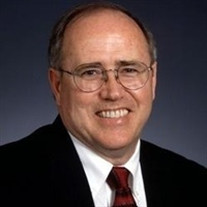 Daniel Grant Brown passed away peacefully the morning of December 24, 2017, with his wife, Linda by his side in their home in Little Elm, TX. He had been battling brain cancer for over two years. Dan was a beloved husband, father, brother, grandfather, and great-grandfather. He was born to Heber Grant and Roxana (Shaw) Brown on July 21, 1945 in Driggs, ID. He was a competitive swimmer and won the tri-state science fair award in 1963.  He was a self-taught programmer who predicted in college that everyone would one day own a computer, earning him a less-than-stellar final grade with his teacher noting that this was “science fiction.”  He received his BS in Zoology (1967) and MS in Microbiology (1972) at Brigham Young University and served honorably in the Army from 1968-1972. He was a cutting-edge microbiologist and food scientist for Research & Development at Hormel Foods, Inc. for over 36 years, inventing low sodium Spam and creating innovative patented technologies to improve food safety.  He retired in 2009 and moved to Texas to be closer to his children and grandchildren. He had a lifelong commitment to hard work and continuing education and instilled that in his children. He said that the key to success is action, and the essential action is perseverance. He annually visited the Texas State Fair with his family, with a turkey leg as his favorite treat. He learned from life’s lessons and continually aspired to be a better man. He married Linda Brand on February 24, 1996 in Austin, MN.  During their marriage, they were able to travel to all 50 states together and also enjoyed dancing, good meals, family holidays, and going on cruises together. Dan was a lifelong member of the Church of Jesus Christ of Latter-day Saints. He served as ward clerk for decades and served in many other appointed roles in the church. He is preceded in death by his parents, Heber Grant and Roxana Brown. He is survived by his loving wife, Linda; son Jeffrey (Heather) Brown; daughters Heidi (Robert) Pazura and Michelle (John) Reed; 10 grandchildren; 11 step grandchildren; and 6 step-great-grandchildren; siblings Patricia Bowdey, Helen (Stan) McGuire, Marilyn Brown, and David (Nanette) Brown. Visitation will be held 11:00AM-12:00PM, Tuesday, January 2, 2018 at the Church of Jesus Christ of Latter-day Saints, Cross Roads Building, located at 8801 Martop Rd., Aubrey, TX.  Funeral services officiated by Bishop Matt Packer will begin at 12:00PM.  The family graveside service will be held at 2:30PM at Slay-Bloomfield-Jones Cemetery in Mountain Springs, TX. In lieu of flowers, please donate to the Histiocytosis Association or the Perpetual Education Fund.  Online condolences may be shared at www.slaymemorialfuneralhome.com. Special thanks to the doctors and staff at UT Southwestern (Dr. Patel, Dr. Froelich, Dr. Nedzi, and Mark) who gave us an extra two years with our husband and father. Arrangements are under the direction of Terri Slay and Slay Memorial Funeral Center.

Daniel Grant Brown passed away peacefully the morning of December 24, 2017, with his wife, Linda by his side in their home in Little Elm, TX. He had been battling brain cancer for over two years. Dan was a beloved husband, father, brother, grandfather,... View Obituary & Service Information

The family of Daniel Grant Brown created this Life Tributes page to make it easy to share your memories.

Daniel Grant Brown passed away peacefully the morning of December...