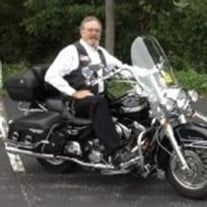 Daniel Wayne Spinks, Sr. of Krugerville, TX passed away Saturday, November 16, 2013 in McKinney, TX. He was born to Neoma and Ray Spinks on March 29, 1950 in Ringgold, LA. Dan was a member of GracePointe Church in Denton, TX and worked for over 40 years at Halliburton as a quality control technical professional. He married Barbara Joan Arnold on November 26, 1980 in Dallas, TX. Dan was a man of great integrity and faith and, had served as the Blue Knights Texas 27 Chapter Chaplain since 2008. Dan was recently appointed as the Rio Grande Conference Chaplain in 2013. He lived his life in service of his Heavenly Father and showed that dedication in his daily life. He served alongside his wife at First Baptist Church in Corinth in the preschool area for 20 years. Dan loved his God first and foremost, followed closely by his love for his wife, Barbara, his children, grandchildren and then his "Knights." Dan was well known for being on his knees at 4:30 a.m. every day praying for the specific request he had, his family, his Knights and our country. On every ride day he would augment that morning's prayer ritual by going out and individually praying over every bike and their rider, even if he didn't know who they were. Daniel would be observed often taking time to wipe off the moisture from the bikes of his fellow Chapter members. We have lost a great man but Heaven has welcomed home a true saint. Please keep his wife, Barbara and family in your prayers. Dan is survived by his wife of 33 years, Barbara of Krugerville; daughter, Holly Moore and husband Dave of Royse City; son, Daniel Spinks, Jr. of Grapevine; son, Ben Venable and wife, Shelby of Krugerville; son, David Spinks and wife, Rachel of Frisco; bonus children Ray Spinks, III and wife, Chelsea of Celina and Heather Cooper and husband, Charles of Flower Mound. Grandchildren surviving Daniel include Zachary Boyd; Tyler Spinks; Addison Venable; Colton Spinks; Ryan and Aislyn Spinks; Charlie, Rachel and Paige Cooper. Dan's mother, Neoma Spinks of Lake Dallas is also a survivor along with a brother, Ronnie Spinks and wife, Karen of Shady Shores. He was preceded in death by his dad, Ray Spinks, Sr. and one brother, Ray "Butch" Spinks, Jr. Visitation for Daniel Spinks is Wednesday, November 20 from 6:00 p.m. till 8:00 p.m. at Slay Memorial Funeral Center in Aubrey, TX. Services are scheduled for Thursday, November 21 beginning at 2:00 p.m. at First Baptist Church; 3033 Meadow View; Corinth TX.; with Pastor, David Smith officiating. Burial will follow at Belew Cemetery in Aubrey, TX. In lieu of flowers donations may be made to the Officers Benevolent Fund with checks made payable to Blue Knights, TX 27. Contact information for donations to Blue Knights please call Steve Tryon (940) 453-6069, P. O. Box 1109, Lake Dallas, TX 75065. On-line condolences may be shared at www.slaymemorialfuneralhome.com. Services are under the direction of Terri Slay and Slay Memorial Funeral Center of Aubrey. To send a flower arrangement to the family of Daniel Wayne Spinks, Sr., please click here to visit our Sympathy Store.

Daniel Wayne Spinks, Sr. of Krugerville, TX passed away Saturday, November 16, 2013 in McKinney, TX. He was born to Neoma and Ray Spinks on March 29, 1950 in Ringgold, LA. Dan was a member of GracePointe Church in Denton, TX and worked for over... View Obituary & Service Information

The family of Daniel Wayne Spinks, Sr. created this Life Tributes page to make it easy to share your memories.