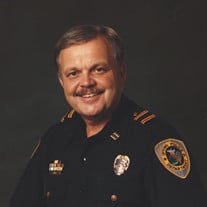 David Eugene Hanks, 72, of Pilot Point, TX, passed away Sunday, November 28, 2021, in Pilot Point, TX. David was born October 29, 1949, in Abilene, TX to Horace Eugene Hanks and Maxine E. Eastis. David married Margie Inez Snow on July 23, 1977, in Irving, TX. David proudly served in the United States Marine Corps and was a Veteran of the Vietnam War. He continually served not only his country as a Marine from November 1, 1966, to May 1, 1970, when he was Honorably Discharged as a Sergeant E-5 but also his community. After serving one combat tour in Vietnam, he returned to Abilene and became a Deputy Sheriff with Taylor County Sheriff’s Department. He then joined the Irving Police Department on May 21, 1972. “Officer Hanks,” as he was known to many, had the opportunity to serve in many positions of the rapidly growing Irving Police Department. He held positions as Irving’s first K-9 handler, was a motorcycle officer, narcotics officer, patrol, SWAT, CID, Detective, Sergeant, Lieutenant, Captain. Jokingly, David always said the department couldn’t figure out what he was best at, so they kept moving him hoping to find the right fit. David retired from Irving Police Department on January 28, 1998. David then served 13 years with Denton County Sheriff’s Department as a reserve Sergeant. David was extremely proud of the men and women he had the opportunity to serve with; after over 41 years as a commissioned law enforcement Officer, he finally retired. But wait there’s more, he then went to work for the City of Keller Police Department as the 911 Dispatch NETCOM manager for five years. David had a servant’s heart and a tireless work ethic, but his true passion was enjoying time with family and especially spoiling his five grandkids who affectionately called him “Pop.” David restored Corvette’s and enjoyed RVing in his spare time and was known as the Redneck MacGyver. There was nothing he couldn’t tear up and nothing he couldn’t repair. If you ever met David it was said to be an encounter not just a meeting, we will never know all the life’s he touched and the people he has inspired. We love David and will miss him greatly. David is survived by his wife, Margie Hanks of Pilot Point, TX; son, Michael Eugene Hanks and wife Nicole of Pilot Point, TX; daughter, Sarah Elizabeth Lowry and husband Ryan of Corinth, TX; five grandchildren, Easton, Cason, McKenna, Callyn, and Merritt; father and mother in-law, Sonny and Betty Snow of Pilot Point, TX; brothers-in-law; Don Johnson and wife Diane of Pilot Point, TX, Shawn Kilgore and wife Sandra of Argyle, TX, and Marney Snow and wife Denise of Colleyville, TX; nieces and nephews, Trey Snow, Samantha Reinier, Cassie Snow, Ethan Kilgore and Zach Kilgore. David was preceded in death by his parents, Horace and Maxine Hanks of Abilene, TX; and brother in-law Tommy Tucker of Coppell, TX. Visitation will be held 6:30PM-8:00PM, Thursday, December 2, 2021, at Slay Memorial Chapel in Aubrey, TX. A funeral service will begin at 12:30PM, Friday, December 3, 2021, at Midway Church in Pilot Point, TX. Interment will follow at Slay-Bloomfield-Jones Cemetery in Mountain Springs, TX. Online condolences may be shared at www.slaymemorialfuneralhome.com. In lieu of flowers, the family requests that you make donations in memory of David to pancreatic cancer research or to helping people who been affected by this devastating disease at https://www.pancan.org/ You may also donate in memory of David’s lifelong service for his country and community at the Irving Police Association. Mail your donations to P.O. Box 170877 Irving, TX 75017. You may also visit their website to view all their worthy causes that your donation will help fund at http://www.irvingpoliceassociation.com/ Arrangements are under the direction of Terri Slay and Slay Memorial Funeral Center.

The family of David Eugene Hanks created this Life Tributes page to make it easy to share your memories.