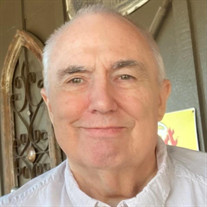 Donald Wilford Ellis, 76, of Cross Roads, TX, passed away Sunday, November 28, 2021. He was born May 19, 1945 in Detroit, MI to Wilford Zadel and Dorothy Minnie (Schram) Ellis. Don married Lois Jean Hampe in Birmingham, MI on June 18, 1977. He served in the United States Navy on the USS America aircraft carrier stationed in the Mediterranean when it was the first ship to respond to the USS Liberty rescue efforts in 1976. Don worked as a systems engineer. His jobs at Bendix and Summagraphics took him all over, including work at the Pentagon and the Panama Canal. His last 21 years before retiring in 2006 were at EDS supporting General Motors as an Application Support Specialist. He loved electronics as a hobby and built his own computer (using Heathkit). He also enjoyed woodworking and made wood components to be used in pens and ice cream scoops. He loved serving the church including running the weekly webcast so those who were unable to attend services could view online. Most of all he loved his family, and they are very grateful that they had one last Thanksgiving with him. Those who knew Don well, knew he would get a twinkle in his eye when he was being mischievous, just like his mom! Don is survived by his wife of 44 years, Lois of Cross Roads, TX; son, Steven Donald Ellis of Overland Park, KS; two daughters, Erin Lizabeth Ellis of Alhambra, CA and Melodie Lynne Palacios and husband Daniel of Savannah, TX; and seven grandchildren. He was preceded in death by his parents, Wilford and Dorothy; and granddaughter, Clara Laraine Palacios. A graveside service will be held at 1:30PM, Thursday, December 2, 2021 at Roselawn Memorial Park in Denton, TX with Stan Martin officiating. Online condolences may be shared at www.slaymemorialfuneralhome.com. Arrangements are under the direction of Terri Slay and Slay Memorial Funeral Center.

The family of Donald Wilford Ellis created this Life Tributes page to make it easy to share your memories.