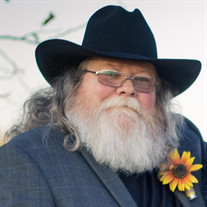 Edward Clayton Pickrel, 61, of Valley View, TX, passed away Monday, February 8, 2021 in Denton, TX. Edward was born February 17, 1959 in Coronado, CA. to James Alan Pickrel and Margaret Ellen Powers. Ed married Susan Winslow Murch on November 5, 1983 in Wayland, MA. He received an associate’s degree in Drafting Technology. Edward, also known as Daddy, Papi, Ed, Brother, Uncle Ed, Nephew, Big Ed, Son, child of God, and Santa Claus never met a stranger. He did not care who you were, where you were from, or what you did in your past. He gave everyone a chance and a clean slate. His arms and home were always open. He reminded others to not forget to smile; because when you do smile the whole world smiles with you and he was always willing to help others at the drop of a hat. Ed was a dedicated worker for Peterbilt Motors for 34 years. He created a red oval family of those he mentored and the second generation that he brought on board. He had a mechanics mind. No matter what it was, he could figure out how it worked and how to fix it. Ed was constantly flirting with his wife Susan. Ed wrote the book on mischief. His kids could not get away with anything even if they tried. He lived for his family, especially his Punkin-head, Goober- head, Knuckle-head, Matthew Wayne, Kanerator, Laney Bug, Tater-head, Pickle-head, and Deacon. Ed shared his love of music with anyone around, and he shared his love of flying with his father. Ed was always up for an adventure or winery road trip. He and Susan traveled to Greece, Cuba, Aruba, Alaska, Arizona, New Mexico, New England, Colorado, New Orleans, Seattle, and San Antonio. He had a love for food, whiskey, cigars, guns, knives, and bonfires. He enjoyed going to the Texas Motor Speedway, dove hunting, fishing, and golfing. Ed gave the most magical hugs. “The kind that makes you feel like you are the most loved person in the world, and everything would be alright.” He never fell short of being the best husband, dad, or Papi in the world. After years of bringing Christmas joy to hundreds of children, Ed and his sleigh have taken their final flight. Ed is survived by his wife, Susan of Valley View, TX; sons, James Pickrel of Pilot Point, TX, and Edward Pickrel and wife Myler of Mt. Springs, TX; daughter, Stephanie Stout and husband David of Decatur, TX; nine grandchildren, David, Abby Beth, and Clayton Pickrel, Laney and Edward Coyt Pickrel, Matthew, Kane, Wyatt, and Deacon Stout; brother, Joseph Pickrel and wife Sharon of Pilot Point, TX; sister, Kathryn Duesman and husband Jeffrey of Pilot Point, TX; father-in-law and mother-in-law, Robert and Jane Murch of Valley View, TX; and Catherine Bourne of Pilot Point, TX. Ed was preceded in death by his parents, James and Margaret Pickrel, Visitation will be held 10:00AM-11:00AM, Saturday, February 13, 2021 at Midway Church in Pilot Point, TX. A funeral service at the church will follow at 11:00AM, with G. A. Moore officiating. Online condolences may be shared at www.slaymemorialfuneralhome.com. In lieu of flowers the family asks that you donate to your favorite charity. A saying he lived by: “Live it like you stole it, love it like you mean it, and by all means park it likes it’s hot.” - Ed “Papi” Pickrel. Arrangements are under the direction of Terri Slay and Slay Memorial Funeral Center. The Pickrel family respectfully requests that all attendees wear a mask and practice physical distancing for the safety of those who are fragile or have health issues. Thank you for your understanding and kindness

The family of Edward Clayton Pickrel created this Life Tributes page to make it easy to share your memories.