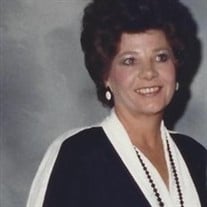 Emily Jeanette Mayer was born in Marion County Georgia. She was born July 10, 1942 and was taken quietly home on the wings of angels April 27, 2013. She was married on June 24, 1977 to Robert Herman Mayer and made their home in Pilot Point, Texas. Parents, Clifton Clark Weed and Susie Lee Curlee Weed of Georgia are deceased as are her siblings; Walter Weed, Mary Weed, Jean Strittmatter, Billy Weed, Nell Roche and Clifford Weed, Jr. Surviving siblings are brother, Grady Weed and wife Mildred of Alabama; sister, Lynda Roberts and husband Jim of Florida and sister Sara Beverly of Florida. Son, Conrad William Boerner, Jr. and wife Rita live in Pilot Point. Her youngest son, Michael Raymond Boerner and wife Judy are both deceased. One granddaughter, Emily Michelle Boerner is also deceased. Grandchildren of her two sons are, William Boerner of Denton, Michael Crouch of Aubrey, Michael W. Boerner of Denton and Eric Boerner of Ponder. Great-grandchildren are Levi and Halley Boerner of Pilot Point and Creedon Boerner of Denton. Included in her family of loved ones are Robert Mayer's daughters; Gloria Mayer, deceased; Bobbie Jezek of Pilot Point, Tina Jezek and husband Jim of Denton and Rachel DeJernett and husband Bob of Pilot Point; their children and grandchildren. Jeanette, also known as "Nett" or "GG" loved angels and the peace she found in the Catholic religion. Although, she lived most of her life in Pilot Point, she never forgot her Georgia and Alabama southern roots. Her childhood roots were poor (but so it was for many during that time). One story she recited was that she went to school with two biscuits dusted with sugar for lunch. Some of the students made fun of her so the teacher made those students trade lunches with her. She always appreciated her life in Texas and did not take for granted the things that she had. She loved keeping an immaculate home where friends and family were always welcome. She might meet you at the door in her bare feet and a glass of sweet tea in her hand. She always wanted hugs all around. Many friends were made during her volleyball playing days and she very much enjoyed those years. Last requests of Jeanette were to be buried with a small volleyball and a fishing rod so she could go fishing with her son Michael when she meets him again. Thank you to family and friends for your concerns and prayers while Jeanette was ill. Southern Hospice Care and Pilot Point Care Center helped make her final days comfortable for her and her family. Conrad and Rita Boerner would also like to thank Bobbie Jezek for her support and help in so many immeasurable ways. Rosary will be said Monday evening, April 29, 2013 from 6:30PM - 7:00PM at the Slay Memorial Funeral Center in Pilot Point. Visitation will follow until 8:00 pm. Mass of Christian Burial will be at St. Thomas Aquinas Catholic Church at 10:00 am on Tuesday morning, April 30, 2013. To send a flower arrangement to the family of Emily Jeanette Mayer, please click here to visit our Sympathy Store.

Emily Jeanette Mayer was born in Marion County Georgia. She was born July 10, 1942 and was taken quietly home on the wings of angels April 27, 2013. She was married on June 24, 1977 to Robert Herman Mayer and made their home in Pilot Point,... View Obituary & Service Information

The family of Emily Jeanette Mayer created this Life Tributes page to make it easy to share your memories.

Emily Jeanette Mayer was born in Marion County Georgia. She was...