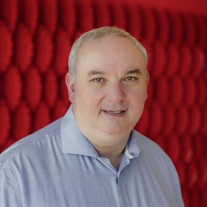 Eric Remy Pelve, 57, of Frisco, TX, passed away on January 11, 2021, surrounded by his loving family. Eric was born in 1964 in Troyes, France, the loving son of Remy Louis Gerard Pelve and Marcelle Sylvie Lissare. Eric earned an engineering degree in Physics from Ecole Supérieure de Marseille. He later enhanced his education with an Executive MBA at Goizueta Business School, Emory University. Eric is survived by his dearly loving mother, Marcelle Sylvie Lissare Pelve, his ex-spouse, Isabelle Viellard, his two beautiful children Audrey (Pelve) Gerringer and Marc Pelve, and his partner, Jodi L. Shannon, whom he met in The Colony, TX, and over the past few years, they shared time seeing the national parks and enjoying a quiet life together. Eric worked as Global Category Director at Koki Holdings America Ltd and previously as Marketing Strategy Director at Hilti. Both teams valued Eric as a reliable colleague and a true friend. During his tenures, Eric lived in Ukraine, Czech Republic, and Canada, where he made long lasting friendships. Eric especially loved photography. From photographic equipment technology to photography techniques, he learned and mastered the art. His photos can be seen on Flickr under Episa (https://www.flickr.com/photos/episa). Some of them were published by Audubon and by Glacier National Park. Memorial services will be held Wednesday, January 19, 2022, at 10:00 AM CT at Slay Memorial Funeral Center, 400 South Highway 377, Aubrey, TX 76227, with Minister David Ake officiating. In lieu of flowers, memorial donations in Eric’s memory may be directed to: The National Park Foundation (https://give.nationalparks.org/site/Donation2?df_id=3144&mfc_pref=T&3144.donation=form1). Online condolences may be shared at www.slaymemorialfuneralhome.com Arrangements are under the direction of Terri Slay and Slay Memorial Funeral Center.

The family of Eric Remy Pelve created this Life Tributes page to make it easy to share your memories.