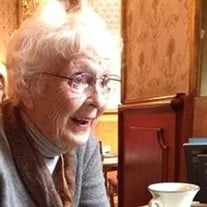 Eva Maria Mako, 84, of Celina, passed away at her home in Celina, TX. She was born October 27, 1930 in Budapest, Hungary to Karl "Charles" and Terezia Krautheim-Karpati. When Eva was 14 years old, her dear parents risked their and Eva's life by hiding a Jewish family of eight in their home upon the German occupation of Hungary in the summer of 1944. In Eva's beloved father's words "From now on you will stay here and we will live or die together." The families survived in Eva's parents home through the liberation on January 3, 1945. Eva continued to stay in touch with these friends for years into the future. Her parents were posthumously recognized with Eva present on July 16, 2001 by Yad Vashem - Israel's official memorial to the victims of the Holocaust, as Righteous Among the Nations. She left her parents and friends in 1956, escaping during the Soviet invasion of Hungary and emigrated to the United States to escape the tyranny of communism. Eva married Peter Francis Mako in Las Vegas, Nevada on September 6, 1961. She bore two sons and pursued a career in clinical chemistry in Cleveland, Ohio/Salt Lake City, Utah and Southern California. Eva's many professional accomplishments include her work assisting in the research of the polio virus in the Laboratory of Nobel Prize Winner, Dr. Frederick Robbins at Case Western Reserve University (CWRU), which contributed to the development of the first polio vaccine. Eva also supported clinical chemistry research and development for the number one globally ranked Biotech company, Beckman Coulter. During her career at Beckman, she also participated in Assay Research and Development and worked in concert with the Director of the National Institutes of Health. Eva retired to Dallas, Texas in 1993 discovering her love and passion for Texas, enjoying a continued highly rich and fulfilling life. Following her diagnosis of gastric and liver cancer in March 2015, Eva opted to not seek extensive treatment but rather continue to trust Christ at the center of her life, living every moment at its best. Eva took her last breath here on earth in Celina, Texas on Sunday, September 27, 2015 at 11:12pm with her sons by her side - taking the next breath of life in paradise with her eternal savior, Jesus Christ. She is survived by her two sons, Peter L. Mako (and wife, Laura Mako) of San Antonio, TX and Thomas Charles Mako of Celina, TX; four grandchildren: Elizabeth Jones, Katherine Jones, Anna Grace Mako, and Sarah Mako; and cousin, Dr. Thomas Szabo of Kaposvar, Hungary. A rosary will be held 9:00AM, Monday, October 5, 2015 at St. Thomas Aquinas Catholic Church in Pilot Point with a Mass of Christian Burial starting at 10:00AM. Fr. Tom Kennedy will officiate. Burial will follow at St. Thomas Cemetery in Pilot Point, TX. A luncheon will be served following the burial. Donations honoring Eva may be made to the City of Hope, www.cityofhope.org/donate look for "donate online". Online condolences may be shared at www.slaymemorialfuneralhome.com. Services are under the direction of Terri Slay and Slay Memorial Funeral Center. To send a flower arrangement to the family of Eva Maria Mako, please click here to visit our Sympathy Store.

Eva Maria Mako, 84, of Celina, passed away at her home in Celina, TX. She was born October 27, 1930 in Budapest, Hungary to Karl "Charles" and Terezia Krautheim-Karpati. When Eva was 14 years old, her dear parents risked their and Eva's life... View Obituary & Service Information

The family of Eva Maria Mako created this Life Tributes page to make it easy to share your memories.