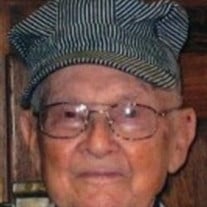 Finley Miller, 100, of Pilot Point, died Wednesday April 2, 2014 at Pilot Point Care Center. Born September 13, 1913 in Grayson County, Texas, the first born of Presley Lee and Susie Shires Miller. He is survived by a half-brother Mike (Karen) of Marysville, TN; sons Guan (Jenny) of Pilot Point and Keith (Linda) of Delta, CO; son-in-law Harold (Wanda) Hampton; eight grandchildren; thirteen great-grandchildren; five great-great-grandchildren; and numerous nieces and nephews. He was preceded in death by his parents, Presley (1980) and Susie (1976); wife, Mary (1986); daughter, Glendora Hampton (1995), son, Jimmy (2005); brothers J.T. (1990), Presley Gene (2009), Kenneth (2013), and sister Francis Larsen (2005). Visitation will be held 6:00PM-8:00PM, Friday, April 4, 2014 at Slay Memorial Chapel of Pilot Point. A funeral service will be held 10:00AM, Saturday, April 5, 2014 at Slay Memorial Chapel of Pilot Point with Rev. Luther Slay officiating. Burial will follow at Pilot Point Community Cemetery. Pallbearers will be grandsons: Thane Miller, Clint Miller, Jerry Miller, Curtis Hampton; great-grandsons: Jordan Bartel, Micah Bartel. Finley grew up in the farming community of Grayson County between the towns of Gordonville and Sadler. He married Mary Belle Blevins on November 16, 1934. They had been married 52 years when Mary passed away in 1986. Finley was a farmer, carpenter, and hardware store owner and operator for many years in Pilot Point. He was a slightly-built man with a lot of energy and a mind of his own. He enjoyed his family, talking to anybody, deer hunting, the mountains of Colorado, and the expanses of western New Mexico. He is now free and able to walk down those timeless trails with the many loved ones who have been waiting a long time for him. Online condolences may be shared at www.slaymemorialfuneralhome.com. Arrangements are under the direction of Terri Slay and Slay Memorial Funeral Center, Pilot Point. To send a flower arrangement to the family of Finley Houston Miller, please click here to visit our Sympathy Store.

The family of Finley Houston Miller created this Life Tributes page to make it easy to share your memories.