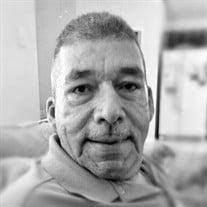 Francisco Javier Ortíz-Casillas, 63, of Dallas, Texas, passed away on Wednesday, September 29th, 2021. He was born to Enrique Ortíz and Abigail Casillas on December 8, 1957, in Tanhuato de Guerrero, Michoacán, México where he spent his childhood and teenage years before coming to the United States. Francisco loved Mexican food and sharing delicious meals with family, and accordingly spent his entire adult life as a cook at El Fenix restaurants in Oklahoma and later Texas. He lived a life that was quietly devoted to caring for his family, especially those still in México, where his heart was truly at home. Francisco was a believer in Jesus Christ and encouraged his sons and family to trust in the Lord for all things, always saying, “God Bless You,” at the end of his phone calls and visits. He is survived by his four sons, Francisco Javier Ortíz and wife Gabby of Humble, Texas; Joseph Francisco Ortíz and wife Sarah of Little Elm, Texas; Michael Javier Ortíz of Dallas, Texas, and Nicholas Alexander Ortíz of Dallas, Texas. Francisco was also blessed with eight grandchildren, Edward, Aiden, Caelyn, and Franky J; Isabelle and Liam; and Soleil and Azula. They along with their parents greatly loved and will miss Francisco dearly. He is further survived by his beloved mother Abigail Casillas, and siblings Enrique Ortíz, Roberto Ortíz, Leticia Ramirez, Rosa Cortez, and Marielena Serna. He was preceded in death by his father Enrique Ortíz. A memorial service will be held on October 26th, 2021, at 2:00 pm at the home of his son and daughter-in-law, Joseph and Sarah, in Little Elm, Texas where Francisco spent many cherished holidays and attended parties for his grandchildren. Spanish translation services will be provided. The family requests that remembrances be made in the form of flowers for the memorial service. He who dwells in the shelter of the Most High will rest in the shadow of the Almighty. I will say of the LORD, “He is my refuge and my fortress, my God, in whom I trust.” Psalm 91:1-2

Francisco Javier Ortíz-Casillas, 63, of Dallas, Texas, passed away on Wednesday, September 29th, 2021. He was born to Enrique Ortíz and Abigail Casillas on December 8, 1957, in Tanhuato de Guerrero, Michoacán, México where he spent his childhood... View Obituary & Service Information

The family of Francisco Javier Ortiz-Casillas created this Life Tributes page to make it easy to share your memories.