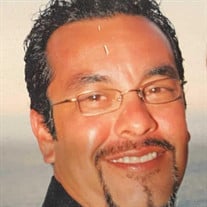 Gabriel Thomas Gomez, 56, passed away suddenly on November 2, 2021. He was born June 19,1965, in Edinburg, TX to Tomas Gomez Jr, and Guadalupe Maria Gomez. Gabriel graduated from high school in Houston at Chester W. Nimitz. He later graduated from the University of Maryland. He served in the United States Army from May 14, 1984 - April 17, 1996. Gabriel was an Army Combat Veteran who proudly served in the Gulf War-Desert Storm. He also held several achievement awards from the Army and top sales performance awards from his professional career. Gabriel and his wife Stacy celebrated 37 years of love and 34 unforgettable years of marriage. He was a loyal, caring, husband as well as a devoted father. Gabriel was a loving and giving man. There wasn’t anything he wouldn’t do for his wife and son. For 21 years, Gabriel was an executive in the telecommunication and medical equipment industry. Gabriel’s talent will live on in the hearts and minds of everyone he interacted with. His hobbies included hunting, horticulture, snorkeling, golf, and most of all, caring for his family. Gabriel is preceded in death by his parents, Tomas Gomez, Jr. and Guadalupe Maria Gomez. He is survived by his wife, Stacy Cellier Gomez; son, Chase Tomas Gomez; brother, Len Alberto Gomez; sister, Laura Michelle Ynigues; brother-in-laws, Lance Charles Cellier and John Rene Ynigues; mother-in-laws; Patricia Cellier, Janice Cellier and Maria Gomez; and father-in-laws, Charles Cellier and Derald Bazil. Gabriel was blessed with a large family of loving nieces, nephews, aunts, uncles, cousins, and step-family members, as well as his military brothers. A memorial service with full military honors, will be held December 20, 2021, at 2:30pm at Dallas Fort Worth National Cemetery, 2000 Mountain Creek Pkwy, Dallas, TX 75211. Please proceed to the main building and park in line behind the family and all others in lane 3. Also, due to the low immunity of Gabriel's immediate family, we ask all that are attending to practice social distancing and wear protective face coverings. In lieu of flowers, we ask that you consider helping Gabriel’s immediate family at https://gofund.me/2e9065cb Online condolences may be shared at www.slaymemorialfuneralhome.com. Arrangements are under the direction of Terri Slay and Slay Memorial Funeral Center.

The family of Gabriel Thomas Gomez created this Life Tributes page to make it easy to share your memories.