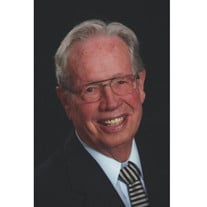 On Saturday, July 24, 2021, Gerald Wayne Brooks, a loving husband, father, grandfather, great-grandfather, and friend was called home at the age of 93. Gerald was born September 20, 1927 in Sadler, Texas to parents Dossie Lee Brooks and Myrtle Kate (Kelly) Brooks. At age 7 the family moved to a farm outside of Argyle, Texas then at age 13 they moved to their farm in the Mustang Community southeast of Pilot Point, Texas. Gerald graduated from Pilot Point High School at the age of 16 and attended one semester at North Texas Teachers College (University of North Texas). After that first semester, Gerald decided to join the Navy in 1944. Gerald was honorably discharged in 1948. He spent his entire Navy career in the Pacific and was a member of Task Force One - Operation Crossroads aboard the USS Saint Croix for the testing of the atomic bomb, code named Able on Bikini Atoll, July 1946. After leaving the Navy, Gerald returned to the family farm where he then met Katherine Ann Meinen and they were married July 24, 1949. Gerald continued his education at North Texas State University (University of North Texas) achieving a Bachelors Degree in Business Administration and earned a Texas Teaching Certificate. He attended Harvard University in 1975, earning a degree in Advanced Management as well. In 1952 he joined Sentry Insurance in Dallas as a claims adjuster. He worked his way through different departments learning everything he could about the business. Gerald transferred several times with Sentry between the Dallas regional office, the Atlanta, GA regional office and the world headquarters in Stevens Point, WI. Gerald retired from Sentry Insurance in 1985 as Chief Operating Officer. During his retirement years, Gerald enjoyed spoiling his grand and great grand kids, spending as much time as possible with family and friends, being involved with Calvary Baptist Church, drinking coffee with the old timers group and returning to his roots of farming and raising cattle in Pilot Point, Texas. If you knew Gerald you quickly recognized his love for family and his genuine care for friends new and old. He wouldn’t let anyone come within ten feet that he didn’t get to know them, their family and their story. Everyone was a friend. His generosity and passion for helping with anything that needed to be done was second to none. If you were lucky, you got to learn his secret handshake to be a member of “The Club”. Gerald is survived by his wife of 72 years Katherine Brooks of Frisco, Texas, daughter Becky Walker and her husband Ben of Frisco, Texas, daughter Deborah Moss and her husband Steve of Las Vegas, Nevada and son Bryan Brooks and his wife June of Pilot Point, Texas. Gerald is also survived by grandchildren Ellen Walker of Littleton, Colorado, Charles Massey of Little Elm, Texas, Cheyenne Preputnik of Hurst, Texas, Sierra Hudson of Aubrey, Texas and six great-grandchildren. Gerald was preceded in death by his parents, brother Kelly Brooks, and grandson Patrick Walker. One thing Gerald was well known for saying, and as a Christian man he knew it to be true throughout life and especially at the end: “The Best is Yet to Come”. Visitation will be Thursday, July 29, 2021 from 6:30pm to 7:30pm at Slay Memorial Chapel in Aubrey, Texas. The funeral will be Friday, July 30, 2021 at 10:00am at Calvary Baptist Church in Pilot Point, Texas. Interment will follow at Pilot Point Community Cemetery in Pilot Point, Texas. Online condolences may be shared at www.slaymemorialfuneralhome.com. In lieu of flowers, the family asks that you make a donation of any size to the Gerald and Katherine Brooks Scholarship Fund. Make checks payable to the Pilot Point Educational Foundation, P.O. Box 1289, Pilot Point, TX 76258. Please notate the scholarship name on the memo line. Arrangements are under the direction of Terri Slay and Slay Memorial Funeral Center.

The family of Gerald Wayne Brooks created this Life Tributes page to make it easy to share your memories.