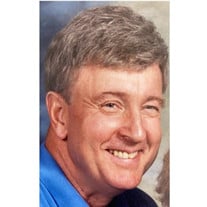 Gerald Keith Mieritz, 78, of Savannah, TX, passed away Tuesday, March 23, 2021 in Plano, TX. Gerald was born January 26, 1943 in Milwaukee, WI to Clarence Gustav Mieritz and Ruth Winkler. Gerald married Janice Armstrong on April 2, 1966 in Abilene, TX. On Friday, April 2, it would have been their 55th wedding anniversary. After graduating High School, Gerald attended the University of wisconsin at Milwaukee and then joined the Air Force in 1964. Gerald served his country in the Vietnam War as a Master Sergeant and was honorably discharged in 1968. After serving in Vietnam he remained in the Air Force Reserves for twenty-five years. His patriotic commitment to his country was commendable, as was his committment to his Savior. Gerald loved the Lord and stayed in the word daily. His faith and commitment followed through with his family as well. Gerald was a loving husband, father, and grandfather. Gerald was a huge fan of sports. He participated in baseball and football in high school. His favorite sport was golf and he loved going to the driving range. He also enjoyed bowling and was on a bowling league. Gerald’s favorite football team was the Green Bay Packers, and he took great pleasure in watching them. Gerald is survived by his wife Janice of Savannah, TX; son, Jason Mieritz of Savannah, TX; daughter, Jena Coker and husband Steven of Savannah, TX; grandson, Jake Coker of Savannah, TX; brothers, Rick Mieritz of Milwaukee. WI, and Ronnie Mieritz of Ft. Worth, TX; sisters, Sharlene Whitehouse of Ft. Worth, TX, Debbie Kopca of Wimberley, TX, and Kathy Giesenschlag of Milwaukee, WI. Gerald was preceded in death by his parents, Clarence and Ruth. No services will be held at this time. Online condolences may be shared at www.slaymemorialfuneralhome.com. Arrangements are under the direction of Terri Slay and Slay Memorial Funeral Center.

The family of Gerald Keith Mieritz created this Life Tributes page to make it easy to share your memories.