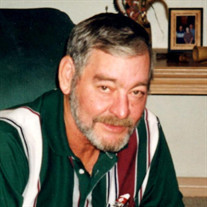 Harold "Sam" Wayne Powers, 72, of Tioga, TX, passed away Monday, January 4, 2021 in Denison, TX. Sam was born February 15, 1948 in Burns City, TX to Arch and Alyeen (Lemons) Powers. Sam married Valta Pickett on March 16, 1968 in Burns City, TX. He served in the United States Army stationed in Germany 1968-1970. Sam was a member of the American Legion Post 550 for 40 plus years and served as Commander for 2 years. Sam was a member of the New Hope Missionary Baptist Church in Mountain Springs. Sam worked as a carpenter/contractor and later retired from Texas New-Mexico Power Co. He enjoyed playing golf, going to the horseraces, and having a beer with his friends. Sam is survived by his wife, Valta of Tioga, TX; son, Kevin Powers and wife Deedra of Pilot Point, TX; daughter, Cynthia Broyles and husband Rick of Pilot Point, TX; four grandchildren; three great-grandchildren; and several cousins. He was preceded in death by his parents, Arch and Alyeen and brother, Troy Powers. Visitation will be held 10:30AM-11:00AM, Thursday, January 7, 2021 at the Tioga Cemetery in Tioga, TX and the graveside service will begin at 11:00AM with Ricky Patterson officiating. Online condolences may be shared at www.slaymemorialfuneralhome.com. Arrangements are under the direction of Terri Slay and Slay Memorial Funeral Center.

The family of Sam Powers created this Life Tributes page to make it easy to share your memories.