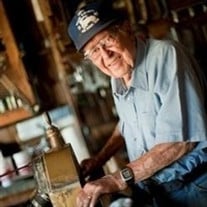 Hugo Ernst Richter, Jr. died peacefully in his sleep on Aug. 13, 2018 in Dallas, Texas. He was 103 years old - the last of a generation in his family to pass. Born Jan. 17, 1915 at home near Marble Falls, Texas, he was the eldest child of Hugo... View Obituary & Service Information

The family of Hugo Ernst Richter, Jr. created this Life Tributes page to make it easy to share your memories.