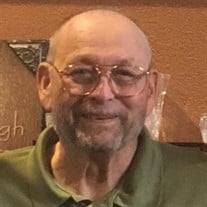 Jackie (Jack) Dean Moore, age 80, transitioned to Heaven peacefully at home on December 24, 2021. He and his wife of 46 years have most recently been living with his son and daughter-in-law in Aubrey, Texas. Jack was born June 17, 1941 in Oklahoma City, OK and spent his childhood years in the Altus, OK and Wichita Falls, TX areas. Jack was a gifted student and graduated early from San Fernando High School after his family moved to California. It was in California that Jack found the love of his life, Claudia Marie Thompson, and they were married October 26, 1975. Jack and Claudia loved to travel with a van or camper eventually taking their two sons along for the ride from an early age. Jack and Claudia had two sons, Scott and Keith. Jack was so proud of his boys and loved tinkering in the garage with bikes, motorcycles and the occasional lawn equipment with them. He encouraged his sons to join the cub scouts and Jack would become a Cubmaster and Scoutmaster in the Little Rock, California area where they lived at the time. Jack worked in the auto finance industry with Chrysler and Nissan where he found one of his favorite hobbies of golf that led to many great friendships over the years. Jack had the patience to play with anyone he met on the course. Working for Nissan led to the family moving to the Dallas-Fort Worth area in 1991. Jack was also a passionate hunter and instilled a deep appreciation for nature in his two boys. Jack was preceded in death by his mother, Pauline (DeFord) Moore and father, Raymond Moore, and sister, Paulette (Moore) Garcia. Jack is survived by his loving and devoted wife, Claudia Thompson; two sons, Scott Moore and his wife Natalie of Aubrey, Texas and Keith Moore and his wife Melanie of Corinth, Texas. Jack also leaves behind six grandchildren, Amber, Korey, Abby, Shelbie, Lillian, and Benjamin and two great grandchildren, Vienna and Mateo; along with numerous nieces, nephews, and cousins. All those that knew him quickly learned Jack lived his life by the Golden Rule of treating others the way you want to be treated and always doing the right thing. His family and friends will forever cherish his counsel. The family will be having an intimate family gathering and any thoughts or well wishes may be sent to [email protected] On-line condolences may be shared at www.slaymemorialfuneralhome.com. Arrangements are under the direction of Charlotte Waldrum Chism and Slay Memorial Funeral Center.

Jackie (Jack) Dean Moore, age 80, transitioned to Heaven peacefully at home on December 24, 2021. He and his wife of 46 years have most recently been living with his son and daughter-in-law in Aubrey, Texas. Jack was born June 17, 1941 in... View Obituary & Service Information

The family of Jackie Dean Moore created this Life Tributes page to make it easy to share your memories.