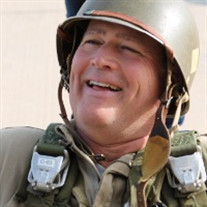 James Robert Hunter passed away peacefully at his home in Gunter, TX on July 28, 2019 at the age of 56 after a long battle with brain cancer. He was surrounded in love by his family. Robert was born on October 12, 1962 in Sherman, TX to Bobby and Rena Hunter of Gunter, TX. Robert was preceded in death by his parents, Bobby Glen Hunter and Rena Faye (Holcomb) Hunter. Robert is survived by Stacy Hunter, his loving and devoted wife of 22 years, who he married in Dallas Texas on April 19, 1997; sister, Rhonda Lynn Arrington and husband and brother, Rusty Arrington of Gunter. Robert is lovingly remembered by his four children, Robert Brett Hunter of Frisco and wife Katherine, Lee Ramsey Hunter of Gunter, Kylie DeAnn Hunter of Gunter, Matthew Ryan Hunter of Gunter, and two nieces Tristan Marie Arrington of Tyler, and Torie Arrington of Winter Garden, Florida. Robert was blessed with one grandson who he absolutely adored, Aiden Andres Rodriguez. He will also be deeply missed by his Mother-in-Law Cynthia Johnson and Katy Peat. Robert was born and raised in Gunter, TX and loved small town living. He was a down home country boy and he lived a simple life. Shortly after graduating from Gunter High School in 1981 he attended Oklahoma Farriers College in Sperry, OK where he graduated in 1982. Robert was raised with horses and enjoyed working with them.  Robert followed in his fathers’ footsteps and began working for the US Postal Service in 1985 as a sub. He was a dedicated employee with 33 years of service and served the City of Prosper with integrity and respect.  Robert retired due to his illness in 2019 having earned several awards. He earned Carrier of the Year for 2016. The award was later renamed The Robert Hunter Service Award, in his honor. He was given an award for heroism for assisting a customer on his route that had fallen. Robert had helped him up, made sure he was comfortable, gave him some water, and then continued with his route like it was no big deal. He was humbled to be recognized for helping someone in need because it was just his nature to help people. He was awarded the Million Mile Award for attaining 1,000,000 Miles or 30 years of Safe Driving without a Preventable Incident. His Million Mile Award is an honor that few ever achieve and was one of his proudest moments. Robert had an endearing respect for his father and for his service to our country as a WWII Paratrooper with 101st Airborne Division. Robert's way of honoring his father was to join a reenactment group and jump for him in his honor. In 2007 Robert attended Jump School with the Airborne Demonstration Team based in Frederick, OK. He went from being a student in 2007 to a primary instructor completing 107 static line jumps. Eventually Robert served as a Jump Master on several operations including his 100th jump which coincided with the 5th qualifying jump for his daughter Kylie. Robert's jump career culminated with a jump in Eerde, Netherlands in 2011 using the same drop zone that his father had used back in 1944 and an additional overseas jump in Sermide, Italy.  Robert had a passion for life and loved working with his hands. He was an avid mechanic, a skill he learned from his Dad, and could often be found working on cars in his garage. He loved sports, and the discipline it took to be successful on the field and in the competition. He had a contagious laugh and a wonderful sense of humor; He could always make people laugh. He was loved by all those who were honored enough to know him and those that were truly blessed were his close friends and family.  The Visitation will be held at First Baptist Church of Gunter on Thursday, August 1, 2019 from 6:00PM-8:00PM. The Memorial Service will be held at First Baptist Church of Gunter on Friday, August 2, 2019 at 11AM. A special thanks to our dearest friends who we consider family- Dennis and Nicole Van Den Heuvel of the Netherlands, Erwin and Elize Janssen of the Netherlands, Brian and Mary Healy, Eric and Denise Sorge, Jeni Warner, John and Laci, Hailey and many others.  In lieu of flowers, donations may be made to FBC of Gunter, Mission Fund in Robert's honor. Online condolences may be shared at www.slaymemorialfuneralhome.com. Arrangements are under the direction of Terri Slay and Slay Memorial Funeral Center.

James Robert Hunter passed away peacefully at his home in Gunter, TX on July 28, 2019 at the age of 56 after a long battle with brain cancer. He was surrounded in love by his family. Robert was born on October 12, 1962 in Sherman, TX to Bobby... View Obituary & Service Information

The family of James Robert Hunter created this Life Tributes page to make it easy to share your memories.

James Robert Hunter passed away peacefully at his home in Gunter,...