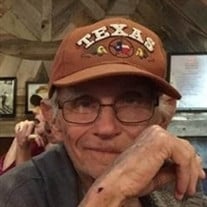 James Roy Owens, 74, of Aubrey, TX, passed away Friday, October 14, 2016 in Denton, TX.  He was born January 9, 1942 in Denton County, TX to John Ralph and Edna Thelma (Aaron) Owens. James was the youngest of 5. He often recounted how his mother, Edna, loved his blonde curls as a little boy and refused to cut his hair.  She hid the car keys, but James’ father snuck him away on the tractor nonetheless. James grew up in Denton County, where he met his wife, Mary (Dean), of 54 years at a skating rink.  James would tell of Mary’s uncle paying him and friends to attend skating events so the girls in the area would come to skate with the boys.  They soon began dating and were married the June 10, 1961 in Aubrey, TX, embarking on a romance and friendship that would last decades. James and Mary were longtime residents of Aubrey.  James was a hardworking man and couldn’t stay still for long.  During peanut season, James was on his tractor, planting and digging.  Come summertime he could be found mowing with his brush hog, all the while working fulltime at Trinity, then Peterbilt, where he worked for 25 years as a welder before retiring in 2007.  James spent his free time in his shop with his dog (Charlie) and cat (Rambo), tinkering with mowers he was fixing for friends or working on his various projects.  He also enjoyed going out to fish on his boat with his elder brother, Fagin, or taking a trip with his travel trailer.  For many years, every morning he would join his buddies at Betty’s Café in Aubrey for coffee and then supper with his wife and cherished friends. James was always ready to lend a hand and put his family first.  He leaves a great legacy in the children, grandchildren and great grandchildren who adored him.  In the spring of 2015, James suffered a massive stroke, just months before the passing of his beloved wife.  The last year and a half showed how hardworking James was, as he joined together with the staff of nurses and therapists at Select Rehabilitation Hospital in Denton, TX to regain mobility and strength.  He and his family will always be grateful for the encouragement he received during this difficult time.  Our hearts are broken over the loss of our dad, pa, and friend, but we rejoice that he is reunited with the love of his life, Mary, now and forevermore. He is survived by his son, Terry Owens of Aubrey, TX; daughter, Debbie Clayton and husband Greg of Pilot Point, TX; two grandchildren, Jennifer Silva and husband Andrew of Howe, TX, Brian Clayton and wife Stevi of Collinsville, TX; two great-grandchildren, Adrian and Henry Silva of Howe, TX; and brother, Fagin Owens of Pilot Point, TX. James was preceded in death by his parents; wife Mary; two brothers, J.W. and Bobby Owens; and sister, Margie Coffey. Visitation will be held 6:30 PM-8:00 PM, Tuesday, October 18, 2016 at Slay Memorial Chapel in Aubrey, TX.  A funeral service will be held at 2:00 PM, Wednesday, October 19, 2016 at Slay Memorial Chapel in Aubrey, TX with Buddy Owens officiating.  Interment will follow at Belew Cemetery in Aubrey, TX.  Online condolences may be shared at www.slaymemorialfuneralhome.com. Services are under the direction of Terri Slay and Slay Memorial Funeral Center. To send a flower arrangement to the family of James Roy Owens, please click here to visit our Sympathy Store.

James Roy Owens, 74, of Aubrey, TX, passed away Friday, October 14, 2016 in Denton, TX.  He was born January 9, 1942 in Denton County, TX to John Ralph and Edna Thelma (Aaron) Owens. James was the youngest of 5. He often recounted how his mother,... View Obituary & Service Information

The family of James Roy Owens created this Life Tributes page to make it easy to share your memories.