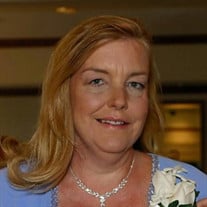 Janet Crommett, 69, of Cross Roads, TX, passed away Sunday, January 31, 2021 in Cross Roads. She was born December 13, 1951 in Aurora, IL to Warren James and Marie (Burtscher) Richardson. Janet married Daniel Clyde Crommett on March 24, 1995 in Carrollton, TX. In her earlier years in Wheaton, IL (where she could never pass up a good Portillo’s Italian beef sandwich!), Jan had a passion for both charity work and caring for children. Along with participating in the Pep club, Spanish club, Drama club and receiving the National Honor Society Award in high school, she was a volunteer at the Parkway Terrace nursing home and assisted with fund-raising drives for various charitable organizations. Jan took great pride in being inducted as a debutante “starlet” of Memorial Hospital’s 19th annual Starlight Ball in August of 1969. After graduating from The University of Wisconsin-Whitewater with a degree in Special Education studies, she carried those passions with her on her move down to Texas, where she cared for many children over many years through her in-home daycare, and through her work with the Carrollton-Farmers Branch Youth Sports leagues, often involving her entire family in helping to coach the boys teams and run the concession stands in both baseball and football. In her retirement she enjoyed crafting and making beautiful wreaths, and spending time cooking, baking and relishing the role of being a grandmother. She would never let anyone leave her home without eating or taking a plate, regardless of whether you were hungry or not! Her home cooked meals did more than feed our bellies, they fed our souls and hearts and we will miss that dearly. She made a point a few years back to begin handwriting all of her favorite recipes into 3 ring notebook after notebook which her children and grandchildren will now be able to hold in their hands, cherish and pass down for decades to come. We may never be able to quite master her green bean casserole, homemade pies, spaghetti sauce with Italian sausage and meatballs, or chicken fried steak, but are so grateful she left us with the memory and the means to try. Janet is survived by her husband, Daniel of Cross Roads, TX; two sons, Adam Palcheck of Little Elm, TX and Daniel Clyde Crommett Jr. of The Colony, TX; two daughters, Laura Palcheck of Little Elm, TX and Melanie Marie Crommett of Carrollton, TX; three grandchildren, James Michael Hoffman, Kenneth Michael Harrington II and Daniel Clyde Crommett III; brother, Robert Richardson and wife Patricia of St. Charles, IL; and numerous nieces, nephews and friends. Janet was preceded in death by her parents, Warren and Marie; son, Steven James Palcheck; daughter, Amy Louise Palcheck; sister, Patricia Havel; and brother-in-law, Charlie Havel. Visitation will be held 10:00AM-11:00AM, Thursday, February 4, 2021 at Slay Memorial Chapel in Aubrey, TX and the funeral service will begin at 11:00AM. Interment will follow at Hilltop Memorial Park in Carrollton, TX. Online condolences may be shared at www.slaymemorialfuneralhome.com. Arrangements are under the direction of Terri Slay and Slay Memorial Funeral Center.

The family of Janet Crommett created this Life Tributes page to make it easy to share your memories.