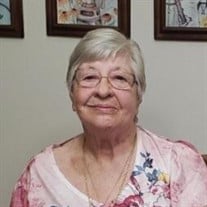 Janet L. Poff, 85, of Carrollton, TX, passed away Tuesday, November 10, 2020 in Carrollton, TX. Janet was born February 2, 1935 in Roanoke, VA to William Henry Cook and Gladys Clark. Janet married Walter S. Poff on September 12, 1953 in Roanoke VA. Janet, known lovingly as Memaw, enjoyed having fun. She enjoyed her life and her family. She liked going to Winstar where she enjoyed all it had to offer and had lots of fun. Janet also collected dolls and elephants, and her collections were only a few of the things that brought her joy. Janet and Walter were happily married for 67 years and they had two sons, Tim and Gary, and daughter, Becky. This union expanded into four generations, as she became known as Memaw to her family and to whoever else she could. Memaw liked taking care of others, most of who would become family to her. She loved her family immensely, and Memaw will be missed greatly by those who loved her. She will leave her family and friends with lasting memories, and a deep sense of knowing they were well loved. Janet is survived by her husband, Walter of Carrollton, TX; sons, Tim Poff and wife Karen of Carrollton, TX, and Gary Poff and wife Dawn of The Colony, TX; daughter, Becky Phillips and husband Tom of Dallas, TX; grandchildren, Timmy and Kyle Poff, Angie Sanders and husband Robert, Michael Phillips and wife Diana, Travis Phillips, and fiance Danielle, and Kayla Poff; great-grandchildren, Andrew, Connor, and Harley Poff, Tanner and Averie Sanders, Colt, Adilyn, and Maisy Phillips, and Zayden Poff; adopted great-grandchildren, Julien, Kolton, Micah, and Karmendy Phillips; brother, Jerry Cook of Bristol, VA; extended family, Ray Savard and wife Nina of Whitesboro, TX, and sons, Andy and Chris. As well as many many others that have joined the clan that were loved and very dear to her. Janet was preceded in death by her parents, William and Gladys; and brothers, Billy, and Dean Cook. Visitation will be held 10:00AM-11:00AM, Saturday, November 14, 2020 at Slay Memorial Chapel of Pilot Point. A funeral service will begin at 11:00AM, with Kyle Poff officiating. Interment will follow at Pilot Point Community Cemetery in Pilot Point, TX. Online condolences may be shared at www.slaymemorialfuneralhome.com. Arrangements are under the direction of Devon Calverley and Slay Memorial Funeral Center.

The family of Janet L. Poff created this Life Tributes page to make it easy to share your memories.