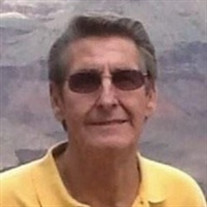 Jerry L. Jones, age 72, of Pilot Point, TX formerly of Parsons, KS for 40 years before moving to Texas passed away February 3, 2015 at Texas Presbyterian Health in Denton, TX following a brief illness. Jerry was born June 4, 1942 in Moundville, MO to Adam H. Jones and Hazel (West) Jones. Jerry was raised in the Nevada, MO area. He enlisted in the Army in 1959 and was stationed in Frankfurt, Germany most of his service. After returning home, Jerry married his teenage sweetheart Connie Jacquinot of Ft. Scott, KS on March 24th 1962. He always said that Connie was his "Best-est friend." Jerry worked at Midwest Metals in Ft. Scott, KS for five years, prior to moving the family to Parsons in 1974. He started working for the Katy Railroad in 1970, which later became the Union Pacific Railroad. He was a Bridge Foreman, a job he truly loved. Due to his heart condition, he retired from the railroad with 30 years of service on January 6, 2001. He helped his wife with her daycare for five years after retiring. Jerry became very ill in July 2006 and God blessed him with a heart transplant on December 3, 2006. He was doing really well up until the time of his death. He attended the Center Bethel Church in Parsons and recently had been attending the Midway Church in Aubrey, TX. Jerry enjoyed playing golf and taking long trips with his wife in their motor home and enjoyed spending time with his family. Survivors include his wife Connie, of 52 years, of the home; three daughters Teresa Keal of Independence, KS; Tammie Murdock and her husband Leroy of Parsons, KS and Tonia Helton and her husband Eric of Celina, TX. Five grandchildren Sammy and Kelsey Murdock of Parsons, KS; Morgan Martin of Independence, KS; Wyatt Keal of Cherryvale, KS and Anneliese Helton of Celina, TX and one great-grandson Oaklee McDiarmid of Independence, KS. Two sisters Martha Keithly of Huffman, TX and Pauletta Lechman and her husband Jack of Nevada MO. Jerry was preceded in death by his parents, three brothers; Ervin, Adam and Roy and five sisters Opal Barns, Wanda Foote, Joy Weely, Wilma Williams and baby sister Donna Sue. Funeral service will be at 2:00PM, Saturday, February 7, 2015 at the Carson-Wall Funeral Home in Parsons, KS. The family will receive friends at Carson-Walls Funeral Home from 6:00PM to 8:00PM, Friday, February 6, 2015. Memorials are suggested to the American Heart Association or the American Cancer Society. Online condolences may be left at www.wallfuneralservices.com To send a flower arrangement to the family of Jerry Laverne Jones, please click here to visit our Sympathy Store.

The family of Jerry Laverne Jones created this Life Tributes page to make it easy to share your memories.