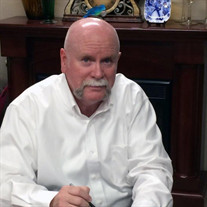 John Lee Holland, 65, of Aubrey, TX, passed away Wednesday, August 18, 2021 in Denton, TX. John was born March 1, 1956 in Newark, NJ to Ansel (Uncle Dutch) Carey Holland and Margaret Mae Lee. John married Mary Alice Patterson on July 28, 1997, in Krugerville, TX. John served in the United States Army. John earned his Associate in Applied Arts and Sciences at Brookhaven College in Dallas, TX in December, 1989. He applied all his education as an Information Technologist working for OraMetrix and continuing on at Peterbilt Motors Company. John was also a Minister who loved preaching the Word and did a daily devotion every day. He led many people to Christ and has many texts from them expressing their gratitude which he gave the Glory to God. “Many are the plans in a person’s heart, but it is the LORD’s purpose that prevails.” Proverbs 19:21 John enjoyed being an officiate at weddings. One of his most memorable being on the Dallas Cowboys football field that began with an entrance on a horse and delightfully ended with a rowdy “Yee Haw” and hats being flung into the air. He loved attending Church and Singing praises to his Savior. John was a loving husband to Mary. A wonderful father to his daughters and a fun and generous grandfather. John and Mary started a non-profit ministry in 2001 with a mission to help those in need. By operating PRAZIM Ministries Reverend John Holland used his talents for the Lord well. John will be remembered by many and missed by all of those whose lives he touched. He has gone on to be with his Heavenly Father and sing with the angels. John is survived by his wife, Mary Alice Patterson Holland of Aubrey, TX; daughters, Denise Hunt of New Braunfels, TX, Marie Holland of Rangely, CO Joanna Holland of KS, and Guynuth Urie of CO; brother-inlaw, Donald Ray Patterson and wife Janice of Krum, TX; sister-in law, Annie Pennington of Denton, TX, Brenda Evans and husband Calvin of Corinth, TX, Dorothy Nell Hill of Pilot Point, TX; and Doris Kruger of Aubrey, TX; close family friends, Chris Pause and wife Paula of Aubrey, TX; wonderful friend and coworker, Tom Harris; and a host of Peterbilt friends. John was preceded in death by his parents, Uncle Dutch and Margaret Holland. A memorial service will be held at 2:00PM, Tuesday, August 24, 2021 at Slay Memorial Chapel of Aubrey in Aubrey, TX with David L. Bruce officiating and Chris Pause sharing eulogy. Online condolences may be shared at www.slaymemorialfuneralhome.com. In lieu of flowers you may make donations to John and Mary’s non-profit ministry at PRAZIM Ministries, P.O. Box 550 Aubrey, TX 76227 Arrangements are under the direction of Terri Slay and Slay Memorial Funeral Center.

The family of John Lee Holland created this Life Tributes page to make it easy to share your memories.