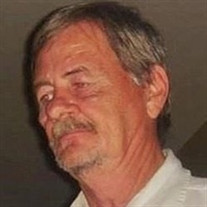 John Wayne Lynn, 64, of Grand Prairie, passed away Saturday, January 4, 2014 in Kennedale, TX. He was born June 12, 1949 in Fort Worth, TX to James and Mary (Picard) Lynn. John graduated in 1967 from Pilot Point Gee High School. He worked for General Motors for 30 years, beginning in June 1967. After he retired, he pursued many hobbies. He earned his pilot's license, became a certified locksmith, and learned how to rebuild computers. He was passionate about classic cars (his favorite being a 1967 Camaro). He would spend most of the day outside where he enjoyed gardening and simply watching nature, waving to the neighbors as he worked all the crossword puzzles he could get his hands on. He loved history and spent several years researching his family's genealogy. He was a master story teller and loved to socialize with his family and friends at the Little Apple and Waffle House while drinking coffee until early morning hours. He is survived by his son, John Richard Lynn of Fort Worth; three daughters, Stephanie and husband Chris Werley of Arlington, Teresa Lynn of Grand Prairie, Amy Wood of Arlington; two brothers, James H. Lynn and Gary L. Lynn both of Grand Prairie; seven grandchildren; one great-grandchild; two nieces; several nephews; and his beloved Chow Chow, Kong. He was preceded in death by his parents. The family would like to thank the staff at Pecan Manor-Melinda, Christy, Tammy, Courtney, Brandi, RoRo and countless others who guided Dad with such care and compassion. Visitation will be held 10:00 AM, Thursday, January 9, 2014 at Slay Memorial Chapel in Aubrey followed by a funeral service at 11:00 AM with Rev. Luther Slay officiating. Burial will be at Belew Cemetery in Aubrey. On-line condolences may be shared at www.slaymemorialfuneralhome.com. Arrangements are under the direction of Terri Slay and Slay Memorial Funeral Center, Aubrey.

John Wayne Lynn, 64, of Grand Prairie, passed away Saturday, January 4, 2014 in Kennedale, TX. He was born June 12, 1949 in Fort Worth, TX to James and Mary (Picard) Lynn. John graduated in 1967 from Pilot Point Gee High School. He worked for... View Obituary & Service Information

The family of John Wayne Lynn created this Life Tributes page to make it easy to share your memories.