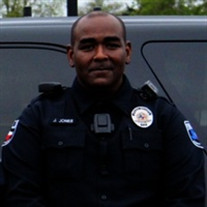 Johnnie Jones III, 37, passed away surrounded by family and friends on Monday, October 20, 2014 in Denton, TX. Johnnie was born and raised in Houston, TX. He was a graduate of Furr High School. After graduation, Johnnie attended Police Academy in Houston. Johnnie was known as a loyal team member, who would go to many lengths to ensure safety and camaraderie within his units. He began his service in law enforcement in Dumas, TX, where he was part of the Dumas Police Department for six years. During this time, he served as an Officer, Sergeant, Detective, and Head of the Swat Team. It was also during this time that he met his future wife, April Luisa Terrazas of Amarillo, TX. The couple was wed on April 12, 2008 and moved to Denton, TX where Johnnie served as an Officer and part of the Community Emergency Response Team at Texas Woman's University. After his time at TWU, he served as an Officer in the City of Oak Point Police Department followed by joining the Northeast Police Department where he served as an Officer up to his death. Johnnie and April became parents to daughter Audreyanna Elizabeth Jones on June 11, 2009. Johnnie, known by his family as "Choo Choo," was a kind and dedicated husband, father, and family man. He was a member of the Immaculate Conception Catholic Church in Denton, TX. His family extended far beyond his immediate relatives, as he was known for lending a hand to all of his fellow law enforcement officers, team members, and their families whenever they were in need. Johnnie was preceded in death by his paternal grandparents Johnnie Jones Sr. and Lois Jones, and uncle Jeffrey N. Jones and maternal grandparents Leroy Jackson and Mildred Jackson and aunt Alice Marie Jackson. Johnnie is survived by his wife April Luisa Jones and daughter Audreyanna, his parents Johnnie Jones Jr. and Deborah Louise Jones of Houston, his brother Joshua Jackson Jones of Houston, his parents-in-law Faustino and Gloria Terrazas of Amarillo, his brother-in-law Faustino Terrazas Jr. and wife Victoria and children of Amarillo, his nephews Faustino Terrazas III and Fabian Terrazas, and his niece Imani Terrazas all of Amarillo. He was also survived by aunts, uncles, and cousins: Judy Hampton; Michael and Cherrie Jones and children Jeffrey Jr., Jason, and Justin; Tony and Mary Ramos and children Manuel, Juan, and Michelle; Hector and Yolanda Garcia and children Tina, Rachel, and Suzie; George and Sylvia Blythe and children George Jr. and Karen; Manuel Ramos Jr.; Bill and Diane Kratochvil and children Patrick, Monika, and Robert; Alex and Lindi Banda and children Tara, Adrianna, and Alex Jane; and Jimmy and Crystal Ramos and children Amber, Aaron, Diamond, Angel, and Shania. The family would like to thank all those who have contributed their time, thoughts, prayers, and support during this hard time including individuals of many local police departments, fire departments, government offices, schools, churches, organizations, the Real Wives of LEOs who have established a fundraising project online, and the hundreds of generous donors to gofundme.com/johnniejones. A memorial service will be held for family and friends in the DFW area on Friday October 24th at Slay Memorial Funeral Center in Aubrey, TX from 7pm - 9pm. For family and friends in the Panhandle, arrangements have been made at Schooler Funeral Home in Amarillo, TX. Visitation will be on Monday, October 27th, from 8am - 5pm with a family greeting from 7pm - 9pm. Rev. Scott Raef will officiate a Funeral Mass for Johnnie at St. Mary's Catholic Cathedral in Amarillo the following day, Tuesday October 28th, at 10am followed by laying him to rest at Memory Gardens. Friends and family of Johnnie are also welcomed to visit the family in Amarillo at 6403 Dominion Street, on and after the evening of Sunday October 26th. Online condolences may be shared at www.slaymemorialfuneralhome.com. Arrangements are under the direction of Terri Slay and Slay Memorial Funeral Center, Aubrey, TX. To send a flower arrangement to the family of Johnnie Jones, III, please click here to visit our Sympathy Store.

Johnnie Jones III, 37, passed away surrounded by family and friends on Monday, October 20, 2014 in Denton, TX. Johnnie was born and raised in Houston, TX. He was a graduate of Furr High School. After graduation, Johnnie attended Police Academy... View Obituary & Service Information

The family of Johnnie Jones, III created this Life Tributes page to make it easy to share your memories.

Johnnie Jones III, 37, passed away surrounded by family and friends...