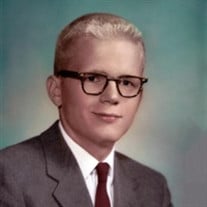 Jon David Stayer, 79, of Frisco, TX, passed away Friday, February 22, 2019.  He was born January 21, 1940, in Carlisle, PA to Dr. David Shellenberger and Grace Naomi (Snyder) Stayer.  He married Bonnie Lourene Dunlap on June 23, 1962, at Evangelical Lutheran Church in Mount Holly Springs, PA. Jon graduated in 1958 from Carlisle High School in Carlisle, PA.   He then attended Texas Christian University in Fort Worth, TX.  He graduated from Rutherford Metropolitan Technical Institute in 1966 with certification in Data Processing.  Jon worked as a Data Base Designer for several city governments.  He led teams of programmers and was known as a problem solver. Jon was diagnosed with Multiple Sclerosis at age 35.  At age 45, Jon, his co-workers and supervisors agreed it was necessary for him to retire on disability from Unisys Corporation.  For 43 years, he fought with it, feuded with it, sometimes accepted it, and even called it “his hitchhiker.”  He found creative ways and designed tools to live with MS. Jon was a lifetime reader. His passion was studying the American Civil War and he was a daily reader of the New York Times.  He was extremely knowledgeable about politics and the political landscape. Jon always had a garden.  When he could no longer walk, a friend built a large garden on stilts for him to reach from his wheelchair.  He was a Boy Scout.  He desired to hike the Appalachian Trail again.  Jon loved to draw and paint designs on anything.  His favorite drawing was his “Skochi” bear. Jon died from complications of Multiple Sclerosis.  He is survived by his wife, Bonnie Lourene; daughter, Heather Lourene Bynum and husband James Scott; grandson Zachary Scott Bynum; granddaughter, Grace Lourene Bynum; two sisters, Anne Wise and Marianne Phillips; two brothers, Tom Stayer and Dr. Stephen Stayer; seven nieces and two nephews; 4 grand nephews and 6 grand nieces.  He was preceded in death by his sisters, Lois Sheaffer and Catherine Stayer. Following Jon’s desire, his body was donated to the Willed Body Program at the University of Texas Southwestern Medical School.  In lieu of flowers, the family requests donations be made to the National Multiple Sclerosis Society, 8111 North Stadium Drive #180, Houston, TX 77054 or online at www.nationalmssociety.org/donate in honor of Jon David Stayer with notification to Bonnie Stayer at 4220 Cotton Gin Road #8202, Frisco, TX 75034. A memorial service will be held Sunday, March 3 at Good Shepherd Lutheran Church, 4809 South Colony Blvd, The Colony, TX with The Rev. Michael Elias officiating.  A Celebration of Life Service will be held Saturday, March 30 at Watermere Retirement Community, 4220 Cotton Gin Road, Frisco, TX 75034 with The Rev. Charles Hubbard officiating.  On-line condolences may be shared at www.slaymemorialfuneralhome.com.

The family of Jon David Stayer created this Life Tributes page to make it easy to share your memories.