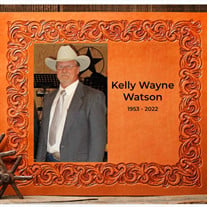 Kelly Wayne Watson, 68, of Crossroads, Texas, ran his last race on February 8, 2022. Kelly was born on September 24, 1953 to Loyd Watson and Patricia Watson in Dallas, Texas. In his early years, Kelly enjoyed training racehorses and hunting. He was a family man and a man that was devoted to his daughters. He was known by many as a great horseman and many more as a great friend. Those who knew him well, knew he had the heart of a Saint, the mouth of a sailor, and more than a few stories of the, “Good ole days,” to share. Later in life, he took great pride in being a, “Paw Paw,” to his grandkids; teaching them the same morals and values that he once taught his daughters. He is survived by his daughters, Ciara Watson-Cordell and husband Michael; Kellsy Watson-Elmore and husband Jason; grandchildren, Johnathen and Presley Cordell, Luke and Levi Elmore; his uncle and friend, Jann Kyle Jones and wife LaDon; siblings, Sherry Jarvies, Terry Everitt, Kenneth Watson and Jimmy Ban Watson. He was preceded in death by his grandparents, Bud and Yvonne Jones; his father, Loyd Watson; his mother, Patricia Watson-Fredrickson; sister, Machelle Watson; and his beloved companion, Black Jack. Although he is no longer by our side, he will be forever in our hearts, greatly missed and never forgotten. On-line condolences may be shared at www.slaymemorialfuneralhome.com Services are under the direction of Brad Shotts and Slay Memorial Funeral Center, Aubrey.

The family of Mr. Kelly Watson created this Life Tributes page to make it easy to share your memories.