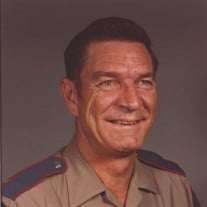 Kenneth Glen Garrett, 88, of Aubrey, TX, passed away Saturday, September 25, 2021 in Aubrey, TX. Kenneth was born October 2, 1932 in Eastland, TX to Alton Kenneth Garrett and Mabel Sue Oglesby. Kenneth married Clista Sue Byrd on February 10, 1956, in Eastland, TX. Kenneth was a proud Veteran of the United States Air Force. He served his country during the Korean War as a Staff Sergeant (SSGT). He was assigned to the 3626th Maintron (ARMT & ELCT), duty as a mechanic, equipment and radio operator, and technical specialist. Kenneth also continued to serve in the Texas National Guard. After leaving the Air Force Kenneth trained in law enforcement. He served as a State Trooper for the Department of Public Safety for over thirty years. During his time as a State Trooper Kenneth was stationed out of Wichita Falls, TX. Among his duty to his country and public safety Kenneth found the time to qualify as a Texas Ranger, although he never actively served, he held a Texas Rangers Badge. Kenneth, known as Poppy, was a wonderful husband, father, and grandfather. Their memories of him as being a loving and patient man who always stood by his word. He enjoyed spending his time with his family. He was an avid gun collector. Up until 2018, he was a long-time resident of Iowa Park and attended Iowa Park Church of Christ. Kenneth spent the last four years of his life with his wife being cared for and loved by his daughter at her home in Aubrey. There are not words sufficient-enough to express the level of love his family has for him, but he will be greatly missed. He is survived by his wife, Clista, daughter Teresa Phillips and husband Mike all of Aubrey, TX; grandsons, Andy Wright and wife Jennifer of Lewisville, TX and Micah Chance Phillips of Aubrey, TX; granddaughter, Michelle Phillips and fiancé Greg Bloodworth of Wichita Falls, TX; great-grandchildren, McKenna Merklin and Tristan Whiteman; and many other loving family members, friends, and coworkers. Kenneth was preceded in death by his parents, Alton, and Mabel; brothers, Billy Jack Johnson and Lyndel Ray Garrett. A graveside service will be held at 1:00PM, Friday, October 8, 2021 at Flatwood Cemetery in Eastland, TX. Online condolences may be shared at www.slaymemorialfuneralhome.com. Arrangements are under the direction of Terri Slay and Slay Memorial Funeral Center.

The family of Kenneth Glen Garrett created this Life Tributes page to make it easy to share your memories.