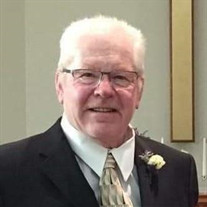 Lonell (Lon) Jay Firebaugh, 76, of The Colony, TX, passed away Tuesday, May 18, 2021 in The Colony, TX. Lonell was born September 29, 1944 in Audubon, IA to Donald Wayne Firebaugh and Lucile Vivian Svensen. Lon went to school in a one room school Douglas #3 until the fifth grade. When that school closed, he transferred to the elementary, and later in high school he met Pam who he fell in love with. Lon married Pam Railsback on November 18, 1961 at First Christ Church in Audubon, IA. He was very talented at the sport of baseball where the adult teams would recruit him to play for their team just to get the win. He spent all his young years working hard on the family farm with his dad and brother Merrill. After marrying Pam, and adding a little boy into the family, all while still in high school, he continued to work for Corky his father-in-law. In 1968, the Firebaugh family of four moved to Boone, IA. Where he worked at Colonial for 14 years. Mr. Firebaugh served as a Deacon at Central Christian Church. In 1982, working for Archway Cookies transferred the entire family to The Colony, TX. In 1986 Mr. Firebaugh’s new nickname became the Little Debbie Dealer, where he served Little Debbies to our area for the next 35 years of his life and was able to retire with them in April of 2021. Lonnie as some called him, spoiled his pets rotten and there were many throughout his life that were loved greatly. He will be missed by his buddy Max and diva Molly and the scaredy cat Helix. Many friends of the family have come to know him as just one of their own family members which call him Papa while he hosted many birthday parties, graduations, weddings, and gatherings for his children and grandchildren. Lon is survived by wife, Pam of The Colony, TX; son, Stewart Firebaugh and wife Kim of Panora, IA; five grandchildren, Jenifer Teel, Ashley Kister, Jaylene Firebaugh, Justin Firebaugh, and Katelyn Dooley; nine great-grandchildren, Jaxon, Jett, Jarek, Jake, Marley, Taytum, Aria, Kohen, and Adaline; brother, Greg Firebaugh and wife Roxie of Grandview, TX; sisters, Linda Wegner and husband Dale of Anita, IA and Jodie Sayre and husband Alan of Guthrie Center, IA; sister-in-laws, Annette Kent of Guthrie Center, IA and Deanna Firebaugh of Pottsboro, TX; seventeen nieces and nephews; and fifteen great-nieces and nephews. Lon was preceded in death by his parents, Donald and Lucile; daughter, Lori Firebaugh; great-grandson, Jagger Teel; brother, Merrill Firebaugh; and brother-in-law, Richard Kent. A funeral service will be held at 2:00PM, Sunday, May 23, 2021 at CrossRidge Church in Little Elm, TX with George Bewley officiating. Interment will follow at Ridgeview West Memorial Park in Frisco, TX. Online condolences may be shared at www.slaymemorialfuneralhome.com. Arrangements are under the direction of Terri Slay and Slay Memorial Funeral Center.

Lonell (Lon) Jay Firebaugh, 76, of The Colony, TX, passed away Tuesday, May 18, 2021 in The Colony, TX. Lonell was born September 29, 1944 in Audubon, IA to Donald Wayne Firebaugh and Lucile Vivian Svensen. Lon went to school in a one room school... View Obituary & Service Information

The family of Lonell Jay Firebaugh created this Life Tributes page to make it easy to share your memories.