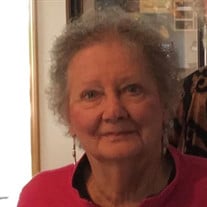 Mary Dora Carlson, formerly of Stoneham, Colorado, entered eternal life on May 16th, 2021. She was residing in a nursing home close to her family in Pilot Point, Texas. Mary was born to Harry and Faye Volck Craig on December 2, 1930 in Sterling. Mary Dora attended school in Stoneham, graduating in 1948. Her love for the agricultural way of life followed her all the way through adulthood. She married Art Carlson where they ranched and farmed south of Stoneham for almost 60 years. Their daughters, Cristi and Ceri, all worked together as a family, loving the outdoors, cattle, and horses. While she worked extremely hard at home and in the field, she always made time to maintain a beautiful yard of flowers. For variety, she also pursued employment away from home, including arranging flowers at Hamilton’s in Sterling, a clerk on the auction block at Brush Livestock Exchange, and the assistant Postmaster at the Stoneham Post Office for many years. She was also a member of the Stoneham Cheery Lot Club, the Royal Neighbors of America, and the First Baptist Church in Sterling. When her daughters were grown, she also became very active in WIFE (Women Involved in Farm Economics) serving as the National Treasure. She had a passion for promoting the voice of agriculture and even testified before the House of Representatives in Washington DC. Along with working, she was also known for her holiday baking of fruitcakes and pecan pies for any special occasions, caring for, and shuttling, elderly people in the community to their appointments, giving tours of the Pawnee Buttes, writing letters to friends and family to stay connected, learning family history, and taking great care of her grandchildren. At age 84, her health began to decline. She chose to move to Texas to live near her daughters and families. She is survived by daughters Cristi Sanders of Pilot Point, TX and Ceri Artzer of Weatherford, TX. Grandchildren include Erin Glenn, Kalyn Sanders, Cory Sanders, Jett Hillman, and Ty (Stevi) Hillman. She is preceded in death by her parents, her brother Charlie Craig, and her husband Art Carlson, all of Stoneham.

Mary Dora Carlson, formerly of Stoneham, Colorado, entered eternal life on May 16th, 2021. She was residing in a nursing home close to her family in Pilot Point, Texas. Mary was born to Harry and Faye Volck Craig on December 2, 1930 in Sterling.... View Obituary & Service Information

The family of Mary Dora Carlson created this Life Tributes page to make it easy to share your memories.