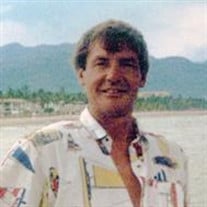 Maurice Eugene Malone, Jr. passed away Tuesday, October 19, 2021 in Denton, TX. He was born February 1, 1944, in Denton, TX to Maurice Eugene Malone, SR. and Docia Mae Winn. He married Connie Crow on August 4, 1990. He served in the United States Army and is a Veteran of the Vietnam War. Maurice “Gene” Malone had a lifelong passion for the water and sailing, which served as the epicenter for all things that brought him happiness. Through this love, he met his beautiful bride of 31 years, and a wealth of loyal friends and caring family. Gene was a devoted husband, compassionate father, and loving “Papa” to his many grand and great-grandchildren. When he was not on the water, he was almost always helping a friend, neighbor, or family member, in which he found great reward. We will dearly miss him. Survived by his loving wife, Connie of Little Elm, TX; sons, Morgan Malone and wife Emily of Lake Forrest, IL, and Rob Anderson and wife Linda of Little Elm, TX; daughters, Lori Strollo of Sommerville, SC, and Cori Neal and husband Terry of Frisco, TX; twelve grandchildren, Preston Malone, Camden Malone, Frank Strollo, Anthony Strollo, Jessica Ogas, Krysta Anderson, Kylie Anderson, Kassandra Day, Taylor Burkhalter, Bailey Morrison, Brooke Smith, and Presley Gray; five great-grandchildren, Isabella Day, Markus Burkhalter, Mikael Burkhalter, Declan Ogas, and Kesler Ogas; sister-in-law, Charlotte Malone; and nephew, Matthew Malone. He was preceded in death by his parents, Maurice and Docia; and his brother Edwin Malone. A visitation will be held Friday, October 22, 2021, from 1:00PM-2:00PM, at Slay Memorial Chapel in Aubrey, TX. A funeral service will follow at 2:00PM with Cloyce Purcell Officiating. Interment will be at Roselawn Memorial Park in Denton, TX. On-line condolences may be shared at www.slaymemorialfuneralhome.com. Arrangements are under the direction of Cindy Slay and Slay Memorial Funeral Center.

The family of Maurice Eugene Malone Jr. created this Life Tributes page to make it easy to share your memories.