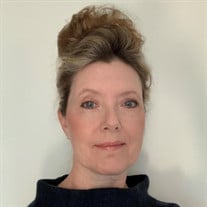 Michele Renee Miles (54) sadly passed away at her dream home in Aubrey, Texas on April 25, 2022. Originally born in Fort Lewis, Washington on September 26, 1967, Michele grew up in Muncie, Indiana with her mother and father, Pamela and Robert Maxwell. An exceptional student, she attended Northside High School where she graduated valedictorian in 1985. She then went on to pursue a Bachelor of Science degree in Biology at Indiana University, Bloomington, where she was inducted into her university’s chapter of Phi Beta Kappa for high achievement in the liberal arts. Michele later went on to pursue medicine at IU where she received her MD in 1993, and she attended her 4-year residency at Baylor University where she discovered her passion for diagnostic radiology. In 1998, she began work as a fellow at the Susan G. Komen Breast Center at Baylor University and has pursued mammography ever since. Michele was a passionate artist with a keen eye for interior design. She took great joy in the equestrian sport, Dressage, in which she competed with her son, Gage. Michele was a loving mother who always placed the needs of others above herself and took great pride in the achievements of her children. A fervent movie-lover, she was enthralled when her son was accepted into the screenwriting program at the University of Southern California’s School of Cinematic Arts. She cherished the company of friends and family and was cherished by many in return. With her exceptional talents and magnetic personality, Michele left a lasting impact on her loved ones and the world, having saved countless lives for her work in breast cancer diagnostics. She will be greatly missed by everyone who had the pleasure of knowing her and will surely rest peacefully knowing how many lives she touched. She loved the Lord and attended Hickory Creek Baptist Church in Denton, TX. Michele is preceded in death by her grandparents, Raymond and Maxine Pope Covalt and Lee and Dorothy Maxwell. She is survived by her parents, Robert and Pamela Maxwell; her brother, Chad Maxwell, and his partner Beth Belt; husband, Robert Miles; and her two children, Gage and Jaclyn Miles. All contributions in Michele’s memorial can be made to Michele’s Wildlife Memorial, P. O. Box 188, Aubrey TX 76227. Funeral services will be held at Michele’s home-town in Aubrey, Texas at 2:00 p.m., Saturday, May 21st, at Slay Memorial Funeral Center at 400 US-377 Aubrey, Texas 76227. Online condolences may be shared at www.slaymemorialfuneralhome.com. Arrangements are under the direction of Bradley R. Shotts and Slay Memorial Funeral Center.

Michele Renee Miles (54) sadly passed away at her dream home in Aubrey, Texas on April 25, 2022. Originally born in Fort Lewis, Washington on September 26, 1967, Michele grew up in Muncie, Indiana with her mother and father, Pamela and Robert... View Obituary & Service Information

The family of Michele Renee Miles created this Life Tributes page to make it easy to share your memories.

Michele Renee Miles (54) sadly passed away at her dream home...