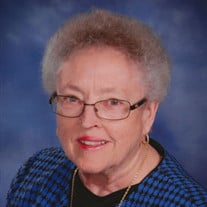 Myra Ann (Lawrence) West entered fully into the presence of the Lord Jesus Christ on Friday, October 8, 2021. She died peacefully at her Gloucester, Virginia home with her two daughters by her side. She was 88. Myra was born June 16, 1933 in Blanket, Texas. She was the only child of the late Edwin Ralph and Henrietta (Cade) Lawrence. She married Clayton L. (Pete) West (deceased) in 1954, the same year she graduated from Texas State College for Women (now Texas Woman’s University) with a degree in Education. She later earned her Master’s in Education from Texas Woman’s University. She was married for 55 years until Pete’s death in 2009. Myra taught second grade for 23 years in Aubrey, Texas. She enjoyed reading, music, and nature, and often incorporated these interests into lessons with her students. Myra served as church pianist at Aubrey’s First Baptist Church, then First Rock Fellowship for almost 50 years. One of her greatest joys was playing the piano, and she passed along her love of music to her four children. She accompanied many students over the years in University Interscholastic League competitions, including her oldest great-granddaughter who plays viola. At 82 years old she played the piano for one of her granddaughter’s weddings. Myra loved the Lord Jesus and she fully surrendered her life to Christ when she was in her mid-twenties. She walked with the Lord all her days as He grew her more and more into the image of Christ. She was a true servant who joyfully helped and encouraged others as God led her. Myra served on the Aubrey Area Library Board for many years, helping write grants for computers, organizing fundraisers, and assisting with book sales. She served as an election judge and worker for several years in Aubrey. Myra remained active in the Aubrey community until she moved to Gloucester, Virginia in 2019 to live with her daughter, Kathleen. Although it was hard for Myra to say goodbye to her church family at First Rock Fellowship in Aubrey, Texas, Myra quickly grew to love her Redeeming Grace Baptist Church family in Gloucester, Virginia, and was continually blessed by their welcoming love and kindness to her the last two years of her life. She appreciated visits, cards, encouraging words, greetings, care and concern by her beloved church family. Myra loved each of her brothers and sisters in Christ in both Virginia and Texas. Myra West is survived by her four dearly loved children: Carson West and his wife Terry; Teresa West Mancuso and her husband Gus; Edward West and his wife Caoimhe; Kathleen West Thompson and her husband Mike. Myra also is survived by her eight grandchildren: Clint West, Melinda Borroel, Rodney Mancuso, Kathrine Christ, Kaitlin Shipley, Marilyn Searcy, Eamonn West, Aisling West, as well as 14 great grandchildren. Visitation will be held Friday, October 15, 2021, at 5:00pm at First Rock Fellowship in Aubrey, TX, followed by the funeral at 6:00pm. Donations in memory of Myra may be sent to the Aubrey Education Foundation’s Pete and Myra West Scholarship Fund at https:// www.paypal.com/paypalme/AubreyEF? Online condolences may be shared at www.slaymemorialfuneralhome.com Arrangements are under the direction of Terri Slay and Slay Memorial Funeral Center.

Myra Ann (Lawrence) West entered fully into the presence of the Lord Jesus Christ on Friday, October 8, 2021. She died peacefully at her Gloucester, Virginia home with her two daughters by her side. She was 88. Myra was born June 16, 1933 in... View Obituary & Service Information

The family of Myra Ann West created this Life Tributes page to make it easy to share your memories.

Myra Ann (Lawrence) West entered fully into the presence of the...