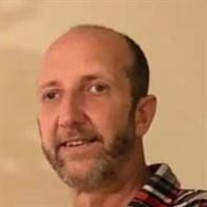 Nathan Gene Schierling, 47, passed away on March 28, 2022, at his retirement home in Burneyville, Oklahoma. Nathan was born March 17, 1975 in Hutchinson, Kansas to Gene Alan Schierling and Karen Sue (Glenn) Schierling. Nathan grew up in Kansas and was a graduate of Buhler High School. He loved animals, raised horses, and was a member of FFA and the 4-H Club where he showed horses and won a number of awards. After graduation, he attended Kansas State University and was a member of Alpha Gamma Rho. Nathan was never afraid of taking a risk when he was confident of it being successful. He was so confident he could succeed at business in Texas, he left college and went to work with Cisco-Eagle. (It turns out, he was correct!) He remained in Texas and became a permanent resident, living the rest of his life in Pilot Point and the surrounding areas. After working for Cisco-Eagle, Nathan chose to open his own business, Schierling Incorporated, installing pallet, racking, and conveyor systems throughout the United States. It has been a successful venture for over 20 years. He was very mechanically minded and loved to work with his hands. That gift was used in his hobby of building cars and trucks. Those in the area are likely familiar with his vehicles and could easily spot them on Hwy 380. Even if folks didn’t know him personally, they probably knew of his trucks. Nathan loved the Lord and loved others. He had a big heart and his life was characterized by his generosity and willingness to lend a helping hand. Nathan would do anything he could to help someone in need whether he knew them or not. He never met a stranger and was the kind of guy anyone would be proud to call a friend. He will be greatly missed by those who knew him. He is survived by his loving wife, Tiffany (Hampton) Schierling of Whitesboro; parents, Gene and Karen Schierling of Inman, Kansas; son, Memphis Schierling of Aubrey and step- sons Brockton Long and wife, Kristie of McKinney, and Pierce Long and wife, Sarah of Farmersville; one grandson, Judah Benjamin Long of Farmersville; brother, Jason Schierling, his wife, Hanah and children Zora and Zane of Ooltewah, Tennessee; grandmother, Frances Glenn of Little River, Kansas; Father-in-law, Donald Hampton and wife, Phoebe of Aubrey; Mother-in-law, Becky LaDuke and husband, Larry of Ponder; and numerous aunts, uncles, cousins and friends. The family will receive friends for visitation and service at Slay Memorial Funeral Home on Monday, April 4, 2022, from 10:00AM to 11:00AM. A procession to Belew Cemetery will be followed by a Graveside service and will leave Slay Memorial at 11:00AM. Interment to follow at Belew Cemetery. Online condolences may be shared at www.slaymemorialfuneralhomes.com. Arrangements are under the direction of Charlotte Chism Waldrum and Slay Memorial Funeral Center.

The family of Mr. Nathan Gene Schierling created this Life Tributes page to make it easy to share your memories.