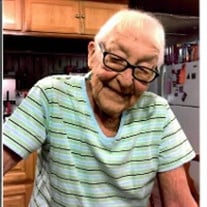 Opal VerNell Holmes of Tioga, TX passed away Sunday, August 4, 2019 at Medical City Hospital in Denton, TX. Her daughter, Tonie Holmes, was by her side. Nell, as she was known, was born in Denton on March 6, 1935. Nell was the daughter of Walter C. and Frances V. (White) Reeves. She married Wilfred F. Holmes on November 21, 1952 in Denton. Nell spent most of her years as a dedicated housewife, mother, grandmother, and great-grandmother. Nell is survived by her husband of 66 years, Wilfred F. Holmes of Tioga, TX; daughters Vanessa Naugle and her husband Harold of Smithton, MO and Tonie Holmes and Don Davidson of Tioga; son, James “Booder” Holmes and Tim Hickey of Battle Creek, MI; grandchildren, Ciaira Naugle Cain and Tyrel Naugle of Missouri and Blake Holmes, Grant Holmes and Victoria Holmes Laudermilk of Texas; great-grandchildren, Alex and Ziva Cain, Larry, Izetta and Orrin Naugle of Missouri, Mary and Charlotte Holmes, and Axel, Kane and Baker Laudermilk of Texas. Nell loved the special gift that was given to her by Victoria and Mitch for Christmas in 2016- a blonde chihuahua she named Oochie. Nell was preceded in death by son, Wilfred C. (Nemo) Holmes and daughter-in-law Rhonda Holmes; special cousin, Mary Marie Morrow; and both parents, Walter and Frances. Family was very important to Nell and time spent with family and friends was very special to her, especially the time spent with the grandchildren and great-grandchildren. She was an avid reader, loved to tend to her flowers, bird watching, and watching old westerns. She also enjoyed going to Ft. Richardson in Jacksboro, TX to camp with family. A celebration of life will be held 6:30PM, Friday, August 8, 2019 at First Baptist Church of Krugerville, TX officiated by Rev. Sam Redfearn and assisted by Jimmy Floyd Davis. Online condolences may be shared at www.slaymemorialfuneralhome.com. Arrangements are under the direction of Terri Slay and Slay Memorial Funeral Center.

Opal VerNell Holmes of Tioga, TX passed away Sunday, August 4, 2019 at Medical City Hospital in Denton, TX. Her daughter, Tonie Holmes, was by her side. Nell, as she was known, was born in Denton on March 6, 1935. Nell was the daughter of Walter... View Obituary & Service Information

The family of Nell Holmes created this Life Tributes page to make it easy to share your memories.