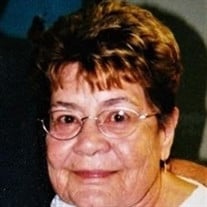 Norma Jo (Woodrum) Cole, 83, of Pilot Point, TX, passed away Sunday, December 3, 2017 in Denison, TX.  She was born May 11, 1934 in Denton, TX to Elbert N. Woodrum and Comette J. Ramsey.Norma and Ralph Leslie "Buddy" Cole, Jr. first met as students at Denton High School, and they continued to date as undergraduates at North Texas State College.  The childhood sweethearts were married on July 2, 1955, at St. David's Episcopal Church in Denton.  Norma and Buddy raised their two boys Les and Alan in Denton, and then moved to Pilot Point to continue their careers.Norma taught 16 years in Denton, including the TWU Demonstration School and Newton Rayzor Elementary School, and 16 years in Pilot Point.  Norma believed in civic duty, serving on the Pilot Point Planning & Zoning Commission for many years, including Chairperson. She also served on the Pilot Point Library Board. She attended the First United Methodist Church of Pilot Point, was a member of Eastern Star of Pilot Point, and a member of the Denton County Historical Society. She also was a member of the Daughters of the American Revolution, Benjamin Lyon Chapter. Norma was an active pack leader for her son’s Cub Scout den during the early years. Norma enjoyed her social activities. She was an excellent bridge player and hosted many bridge club parties while she lived in Denton and Pilot Point. She loved to attend the Denton Lunch Bunch with dear school mates and friends.  She was also very active in the Pilot Point 19th Century Club.  She formed lifelong friendships in these clubs.  RV Camping was one of her and Buddy’s favorite outdoor activities. Norma also bass fished on many lakes with Buddy and her boys, many times catching the largest fish of the trip. She was often the organizer of family gatherings and enjoyed painting and genealogy.Norma is survived by her two sons, Leslie Elbert Cole and wife Allyson Ann (deceased) of Coppell, TX and Alan William Cole and wife Lori Kathryn of Highlands Ranch, CO; eight grandchildren including Amy Thomas and husband Jeff Thomas, Leslie Baxter and husband Ryan Baxter, Ryan Cole, Ramsey Cole, Rebecca Cole, Hallie Cole, Claire Cole, and Will Cole; five great-grandchildren including Reagan Thomas, Benjamin Thomas, Makayla Baxter, Mackenzie Baxter, and Matthew Baxter.She was preceded in death by her husband, Buddy; parents, Elbert and Comette; and sister, Mary Sue (Woodrum) Bean.Visitation will be on Saturday, December 16, 2017, at 9:00AM at the First United Methodist Church in Pilot Point, TX. The service will be immediately following visitation at 10:00AM with Reverend Jim Porter officiating.  Interment after the service at Krum Jackson Cemetery in Krum, TX.  Online condolences may be shared at www.slaymemorialfuneralhome.com. Donations may be made in Norma’s memory to the Pilot Point Community Library.Arrangements are under the direction of Terri Slay and Slay Memorial Funeral Center. To send a flower arrangement to the family of Norma Jo Cole, please click here to visit our Sympathy Store.

The family of Norma Jo Cole created this Life Tributes page to make it easy to share your memories.