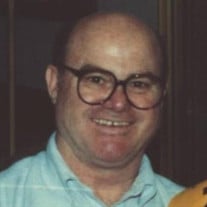 Otis Jason North, 82, of Pilot Point, TX, passed away Wednesday, May 5, 2021 in Pilot Point, TX. Otis was born December 15, 1938 in Pecos, Texas to Johnny and Minnie Bell (Heath) North. Otis married Patricia Rose on February 25, 1977 in Carrollton, TX. Their marriage was blessed with two children and 44 wonderful years together. He was employed in the electronics field as a product manager. Otis proudly served his country in the United States Army. Otis was a lover of nature and being outdoors. He especially enjoyed bird watching, gardening and plants. Otis was a fan of football and loved the Dallas Cowboys. According to his family, one of his greatest attributes was being humble. Otis was always happiest with a dog or grandchild in hand or nearby. He was an exceptional man, husband, father and the ultimate grandpa. He had a jovial and loving spirit as well as being a steadfast provider and protector. Otis was playful, loved to joke and tease. He had a fabulous grin that stretched his whole face. It was honestly a treat to be loved by him. Otis is survived by his wife, Patricia of Pilot Point, TX; son, Matthew North, Sr. and wife, Bonnie of Pilot Point, TX; daughter, Shana North of New Braunfels, TX; grandchildren, Levi North of Denton, TX, Garrett North of Frisco, TX, Grace Smith of Imperial Beach, CA and Katie North of Pilot Point, TX; great- grandchildren, one on the way; and many nieces and nephews. Otis was preceded in death by his parents, Johnny and Minnie; brothers, Wilbur Ray North, Hubert North, Delbert North, Elton North and Johnny North, Jr.; sisters, Elsie Mae North-Byrd, Madine North-Williams, Imogene North-Lindley, Anita North-Moore, Geraldine North-Davis, Betty Jo North-Farley, and LaVerne North-Williams. Visitation will be held 6:30 PM-7:30 PM, Wednesday, May 12, 2021 at Slay Memorial Funeral Center in Pilot Point, TX. Online condolences floral tributes may be made at www.slaymemorialfuneralhome.com. Arrangements are under the direction of Devon Calverley and Slay Memorial Funeral Center.

The family of Otis Jason North created this Life Tributes page to make it easy to share your memories.