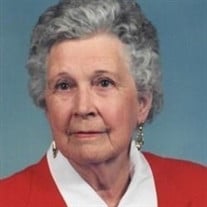 Edna Pearl "Pat" Ray, known to most as MamaRay, of Pilot Point, Texas, went to be with our Lord on Wednesday, January 10, 2018, at the age of 97.  She was surrounded by family and friends.  Pat was born March 30, 1920, in Sanger, Texas, to Pearl Belcher and Opal Vaughn.  After graduating high school at the age of 15, she waited a year until she turned 16 and then enrolled in nursing school in Gainesville, Texas.  While in nursing school, Pat met and later married Bill Ray on February 4, 1939, in Marietta, Oklahoma.  Together, they raised their family mostly in Pilot Point, Texas.  Pat loved being a mother and was blessed to be a stay-at-home mom for numerous years.  Being the diligent worker she was, Pat later worked a host of jobs, including working for Pilot Point Gee School and working in the nursery at Calvary Baptist Church for 23 years, where everyone called her MamaRay, the name given to her lovingly by her first grandchild.  MamaRay was very compassionate and had a love for children.  Many babies were held and comforted by this special lady.  MamaRay leaves behind one daughter, Paula Crowsey of Pilot Point, Texas; two sons, Michael Ray and wife Condy and Kent Ray of Pilot Point, Texas; one step-son, Bill Ragsdale of Owasso, Oklahoma; one sister, Jan Cunningham and husband Charlie of Denton, Texas.  MamaRay also is survived by five grandchildren, thirteen great-grandchildren, one great-great-grandchild, and a host of friends she adored.  She was preceded in death by her parents, Pearl and Opal; her beloved husband, Bill; three brothers, Jack, Joe, and Cecil Belcher; and two sisters, Maxine Hayes and Hazel Abbey.Visitation will be held 10:00 a.m. - 11:00 a.m. Saturday, January 13, 2018, at Calvary Baptist Church in Pilot Point, Texas, and the funeral service will begin at 11:00 a.m. with Rev. Luther Slay officiating.  Interment will follow at Pilot Point Community Cemetery in Pilot Point, Texas.  Online condolences may be shared at www.slaymemorialfuneralhome.com.Arrangements are under the direction of Terri Slay and Slay Memorial Funeral Center. To send a flower arrangement to the family of Pat Ray, please click here to visit our Sympathy Store.

The family of Pat Ray created this Life Tributes page to make it easy to share your memories.

Edna Pearl &quot;Pat&quot; Ray, known to most as MamaRay, of Pilot Point,...