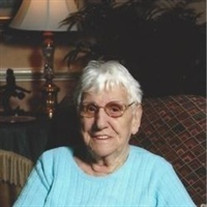 Rachel Duesman, formerly of Pilot Point died Tuesday, December 15, 2015 in North Richland Hills, TX.  Rachel was born July 11, 1918 in New York to parents, Silvio and Philomena Stanzo.  As an infant, both parents died of the flu.  The grandmother could not care for an infant so she placed her in an orphanage.  The St. Thomas Catholic Church in Pilot Point announced if anyone could adopt any children, to please do so.  Edward and Angelica Blumberg took the opportunity to help out. Rachel arrived with a nurse on the Orphan Train at the young age of 2.  She was reared on a farm east of Pilot Point.  Rachel attended church and school at St. Thomas Catholic Church.  She enjoyed riding her horse and riding around with her new parents. She grew up to be a very sweet and happy girl.  She married Herman Duesman on September 2, 1934.  They made their home in Pilot Point, where she lived until 2008 and then moved to North Richland Hills, Texas. Rachel is survived by her sons, Ralph and wife Shirley Duesman of Denton, Leo and wife Karen Duesman of Ft. Worth; daughters, Margaret and husband Cecil Wilde of Ft. Worth; Mildred Wesley and Joyce Green  both of Ft. Worth; ten grandchildren; twenty-six great-grandchildren; nine great-great grandchildren; and sister, Dorothy Mae Cashion of Pilot Point.  She is preceded death by her parents; husband; daughter, Barbara; two grandchildren, Kimberly Lowery and Jeremy Green; sister, Annie Pelzel; brother, Lawrence Blumberg; and longtime friend, Vince Simmel. Visitation and rosary for Rachel will be Friday, December 18, 2015 beginning at  9:30am with Mass of Christian Burial following at 10:30am at St. Thomas Aquinas Catholic Church in Pilot Point.  Burial will be at the St. Thomas Aquinas Catholic Cemetery. Services are under the direction of Terri Slay and Slay Memorial Funeral Center, Pilot Point. To send a flower arrangement to the family of Rachel Duesman, please click here to visit our Sympathy Store.

The family of Rachel Duesman created this Life Tributes page to make it easy to share your memories.