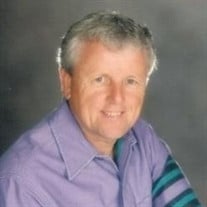 Rex McCarter Moody, age 71, of Aubrey, passed away Sunday, July 14, 2013 at his home. He was born October 17, 1941 to the Reverend James Austin and wife, Edna McCarter Moody in Dallas. Rex graduated from Brewer High School in Ft. Worth, attended UT Arlington, and later served in the US Navy. He married Judith Hopper December 23, 1960. His work career began with Red Ball Motor Freight, then was the National Sales Manager for Consolidated Freightways, later retiring with APL Logistics. His life revolved around God, his family, and his love for gospel music. Rex was part of many well known Southern Gospel singing groups dating back to the early 60's with The Sons Of Calvary, The Masters Four Quartet, The Wills Family, and of course his own family group The Rex Moody Singers. Rex and his son Scott were members of the nationally known Bob Wills & The Inspirationals, which led them both to be inducted into the Texas Southern Gospel Music Hall of Fame in 2012. He left a musical legacy in his children and grandchildren, who all share in the musical gifts that he loved so much. Rex loved to fish and golf almost as much as he did singing! His favorite partners for all of these activities were his children and grandchildren. In his early years he enjoyed riding motorcycles, racing cars, and boxing in the Navy, and moved from town to town as a preachers kid, "AKA" PK. He loved going to church, helping others, and bragging about his family as much as anyone. His most recent display of helping others was that of providing the first check to the Hope Food Bank for the new building being erected at Hill Top Assembly of God, where he faithfully attended since 1983. Rex is survived by his wife Judy of Aubrey; son, Michael Scott and wife Kristal Moody, daughter, Deandra Kay and husband, LZ Harmon, Jr.; grandchildren, Justin Harmon, Andrea McDonald, Jason Harmon, Jessica Waltz, Kandis Moody, Kaleb Moody; great-grandchildren, Jax McDonald, and Lillie Harmon; brothers, Hugh and wife Ann Moody, Jerry and wife Vicki Moody, Charles and wife Debbie Moody; sister, Mary and husband C.L. Simco. Rex was preceded in death by his parents and brother, Bill Moody. Visitation will be Monday, July 15, 2013 from 6:00 - 8:00 pm at the Slay Memorial Chapel in Aubrey. A funeral service will be held Tuesday, July 16, 2013 at Midway Baptist Church at 2:00 pm with David Bruce, John Theisen, and Sam Redfern officiating. Burial will follow at Belew Cemetery. On-line condolences may be shared at www.slaymemorialfuneralhome.com. Arrangements are under the direction of Terri Slay and Slay Memorial Funeral Center, Aubrey. To send a flower arrangement to the family of Rex Moody, please click here to visit our Sympathy Store.

Rex McCarter Moody, age 71, of Aubrey, passed away Sunday, July 14, 2013 at his home. He was born October 17, 1941 to the Reverend James Austin and wife, Edna McCarter Moody in Dallas. Rex graduated from Brewer High School in Ft. Worth, attended... View Obituary & Service Information

The family of Rex Moody created this Life Tributes page to make it easy to share your memories.