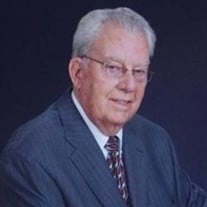 Robert “Mr. Bob” Joseph Bleyenberg, 83, of Krugerville, passed away Tuesday, October 17, 2017 in Krugerville, TX.  Robert was born February 27, 1934 in Kansas City, Missouri to Frank C. Bleyenberg and Lillian Jones.  Robert married Charlotte Aberle on April 28, 1962 in Timberlake, SD.He was an avid baseball player and was drafted by the New York Yankee's in 1955. He was also drafted by the Army and served from 1955-57. Bob was the owner of Pet Haven Memorial Park since 1991.  He was always known to offer one of two things: some form of wisdom or a joke to leave everyone laughing.A special thanks to Amada, Kindred Home Health Care & VNA Ann's Haven Hospice care team for all the support and kindness.Robert is survived by his wife, Charlotte of Krugerville, TX; two daughters, Colette Olivieri and Cheryl Storm both of Krugerville, TX; grandchildren, Cheyenne Olivieri, and Nicole Pena and husband, Rodney; great-grandchild, Jayden Pena; sister, Carole Thomason and husband, Donald of Kearney, MO; two other grandchildren; and eight other great-grandchildren.Robert was preceded in death by his parents, Frank and Lillian; and nephew, Gary Thomason. There was a Rosary and Mass held at St. Thomas Aquinas Catholic Church in Pilot Point, TX. Online condolences may be shared at www.slaymemorialfuneralhome.com. Services are under the direction of Terri Slay and Slay Memorial Funeral Center. To send a flower arrangement to the family of Robert Joseph Bleyenberg, please click here to visit our Sympathy Store.

The family of Robert Joseph Bleyenberg created this Life Tributes page to make it easy to share your memories.